Homecoming for digital editor as he lands website publisher role 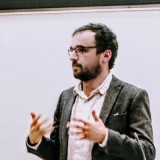 A digital editor is set to return to his home county to run a regional publisher’s latest news website.

As reported by HTFP in November, Reach plc is planning a new digital-only project in Lancashire, currently the heartland of rival publishers JPIMedia and Newsquest.

Reach has now revealed further details about the news site, to be called Lancs Live, including who will serve on its launch team and where it will be based.

Luke Beardsworth, currently digital editor at Bristol Live, the Bristol Post’s online counterpart, has been unveiled as publisher and will head up the operation from an office in Bamber Bridge, near Preston.

Lancashire native Luke, pictured, will be joined by football writer Alex James, who has been poached from his role as sports editor at the rival Lancashire Telegraph, along with two trainee live news reporters – Chantelle Heeds, who joins from the Liverpool Echo, and Olivia Baron, who graduates from News Associates in Manchester this month.

Olivia has spent two years as a trainee reporter on hyperlocal website Blog Preston, which was founded as an independent project by Luke and Reach Regionals editor (digital) Ed Walker.

The team will be joined by an as-yet unnamed advance content writer, due to be unveiled in the coming weeks, and will continue to be supported in the early part of 2019 by Manchester Evening News social build editor Emma Mountford.

Emma has been responsible for launching Lancs Live’s social media channels prior to the site’s launch, which is due to take place in the early part of this year.

In his role, Alex will lead the site’s coverage of Burnley FC, Preston North End, Blackburn Rovers and Blackpool FC.

Blackpool and Preston are currently covered by JPI Media-owned dailies The Gazette and the Lancashire Post respectively, while Blackburn is the home of Alex’s old paper the Telegraph.