The former home of two sister dailies is set to be demolished to make way for two new hotels under plans revealed by a regional publisher.

Reach plc has unveiled proposals to transform Thomson House – the old headquarters of Newcastle titles The Chronicle, The Journal and the Sunday Sun – into a £24m hotel and aparthotel scheme, creating almost 200 jobs.

Thomson House, in Newcastle’s Groat Market, was home to the newspapers for 53 years until staff moved to new offices, in Eldon Square, in February 2018.

If approved, the 1960s print hall and office building will be replaced by two hotels – a 198-bedroom hotel, including 10 deluxe rooms, and a 96-studio aparthotel. 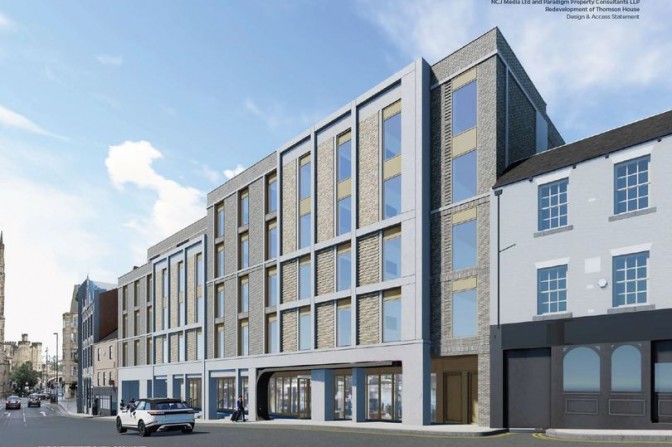 The application to Newcastle City Council also includes plans for a restaurant, meeting rooms and a gym.

The project is expected to create more than 40 new jobs in the hotels and associated facilities, as well as 150 jobs during the 18-month construction phase.

A story by the Chronicle states: “Reach plc and its consultants, together with the city council and Historic England, have consulted at length to evolve a design in keeping with the city’s architectural and historic legacy.

“The company began discussions with the council last May and also held meetings with Historic England, using the organisations’ advice to help shape the final design.

“Careful consideration has been given to the design of the new development, which will range from four to eight storeys, which has presence onto both Groat Market and Pudding Chare and is within one of the city’s important conservation areas.

“Demolishing Thomson House means open and green spaces can become part of the scheme, recreating courtyards that were lost to previous development.”