A regional newspaper office originally opened by the then Prime Minister Harold Wilson in 1965 is to close its doors for the last time today.

Staff at Newcastle’s Chronicle, Journal and Sunday Sun newspapers are leaving their base on the city’s Groat Market for a new home at Eldon Square.

The offices were opened by Mr Wilson in May 1965 and once housed a printing plant and the Press Association’s journalism training centre as well as the three newspapers.

However the printing plant closed in 2015 and the training centre last year and the titles, now owned by Trinity Mirror, are now moving to state-of-the-art premises less than half a mile away from the existing building.

The Groat Market office was originally known as Thomson House after the papers’ then owner, Lord Thomson of Fleet.

He is pictured below left with Mr Wilson at the opening – one of a series of historic images reproduced in yesterday’s Chronicle to mark the office move. 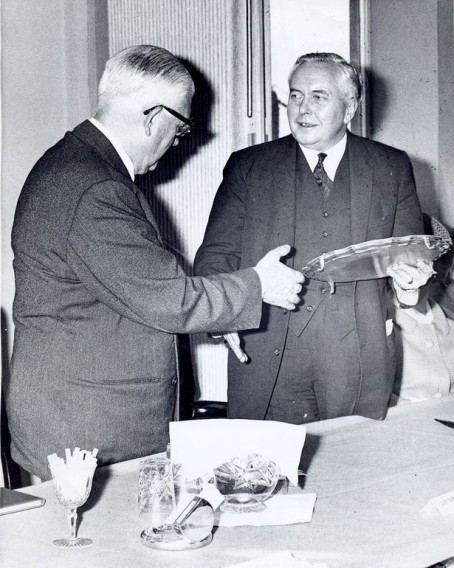 Editor-in-chief Darren Thwaites said: “Leaving our home of so many years has brought back some great memories and we’ve enjoyed sharing old photos with our readers. It’s a perfect move for us as we continue to grow our digital audiences and modernise the business.”

“We’re delighted with the new offices. They’re right in the heart of the city overlooking the famous Grey’s Monument. We can even see inside St James’ Park

Trinity Mirror North East Managing Director, Bob Cuffe added: “This move to the best location in Newcastle is a hugely exciting one for our business – placing us right at the centre of the city and the business community.

“The reaction of colleagues and our business partners has been extremely positive – and rightly so.”