Police have launched an investigation after death threats were sent to staff at a hyperlocal news website.

The Bedford Independent received the threats after reporting on five men being found guilty of murdering Przemyslaw Golimowski, a drug dealer who was fatally stabbed and beaten with a golf club in his home in front of his girlfriend.

After publishing the story, anonymous comments were posted on the Independent’s Facebook page which included threats of violence and racist remarks.

The comments were later deleted but Julia Course-Crofts, the Independent’s commercial director, then received two graphic answerphone messages in which the caller said they would “like to take a knife to your throat and kill you” and subjected her to a barrage of vile abuse. 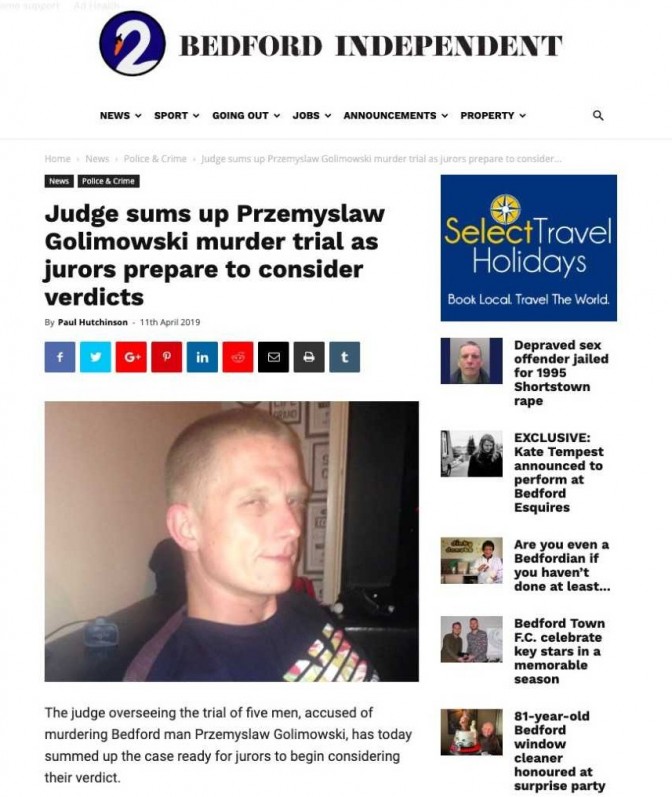 The court report that led to the death threats against staff

Independent managing editor Paul Hutchinson told HTFP be believed the threats were to the Bedford Independent in general and that the caller targeted Julia as hers was the only number available and her name and voice were on her answerphone’s outgoing message.

He said: “This kind of behaviour is not acceptable. While these were only threats, journalists the world over are facing violence and murder from those who wish to silence the reporting of factual news. These threats often appear to be encouraged by world leaders who do not like scrutiny directed towards them.

“It’s also my belief that the reduction in court reporting and local news coverage has led to this reaction. People are not used to seeing court reports in this way. When they then involve someone they’re connected to, they react in a manner that is most likely uncharacteristic but equally despicable.

“The fact these comments were also directed at someone outside of our editorial team shows how important it is for all staff at all news desks to have suitable protection and for threats like this to be dealt with severely. We will not hesitate to work with the police to ensure our staff are safe and that people know they cannot make threats like this.”

Bedfordshire Police have worked with Independent staff to ascertain the identity of the caller and take appropriate action following the story’s publication last month.

Paul added: “Bedfordshire Police have been brilliant and have taken this issue very seriously. They quickly identified the caller and discussed options for action with us.

“With their support Julia decided what she wanted to happen, and they have respected that decision. She has also been offered further victim support.”

A Bedfordshire Police spokeswoman told HTFP: “We can confirm we are investigating a report of malicious communications. Our inquiries are ongoing and we continue to update the victim.”