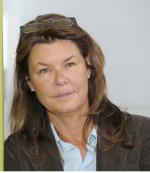 The patron of the NCTJ has called on the journalism industry to challenge the role of so-called “citizen journalists” – warning that their contributions need to be accompanied by “hefty health warnings.”

Sky News special correspondent Alex Crawford says there needs to be clearer acknowledgement that citizen journalists are not trained reporters.

Alex, pictured, was appointed the National Council for the Training of Journalists’ first ever patron last year.

In a blog for the NCTJ, she shared her concerns about the “wholesale replacement of journalists with citizens” who are not properly trained.

Wrote Alex: “We, as an industry, need to take on the ‘citizen journalists’. They perhaps do have a role but their contributions need to be accompanied by hefty ‘health warnings’. I am not sure the way to preserve journalism is to fudge, blur and muddy the waters between those trained with solid backgrounds in journalism and those who are just citizens with cameras.

“Every right-thinking channel and media outlet rightly prides itself on its independence – and constantly fights accusations that it’s not skewed. As a person who’s worked for an organisation whose biggest shareholder was Rupert Murdoch, I’ve fought claims for about 30 years of being ‘a Murdoch employee’ (whatever that means but it seems to imply loss of independence and absence of clear, unbiased thinking).

“Yet I’ve never once been told how to write a story; what angle to take; even what nuance to give it. I’ve never been told to change a particular direction in any of my reports to suit a particular narrative. It’s just never happened.

“Now, I am positive there will be many out there who will just refuse to believe this, but when media organisations take on civilians, or activists, and pump out their stuff as their own – then the arguments become very difficult to keep on making. I’m not talking about commissioned material, paid for at recognised rates, for freelancers operating in difficult-to-get-to places, (although that’s another argument.)”

Alex went on to argue she believed there “probably needs to be a clear acknowledgement that they are not journalists” and that their material “hasn’t gone through the same rigorous filters as an independent piece from a trained journalist”.

She added: “Because if we are saying anyone out in the field in a difficult spot can produce the same quality material as a trained journalist, then what is the point of training at all, of young people going to university to do journalism degrees or any other film-making or reporting course?

“And likewise the editors who employ them and appear not to care – so long as these agitators can create enough attention for people to buy the newspaper or click on the online story. But what it’s done is denigrate real journalists and real journalism.”