The government has announced it will review the future of so-call “smart motorways” less than 48 hours after a regional daily called for it to do so.

The Nottingham Post launched a front page call urging Transport Secretary Grant Shapps to stop building more of the motorways, on which sections of hard shoulder have been converted into running lanes, amid safety fears.

The Post’s plea came after it ran an exclusive interview with the sister of a Romanian van driver who was killed on the M1 in June on a stretch of smart motorway.

Editor Mike Sassi told HTFP the Post has been investigating the issue for almost a year. 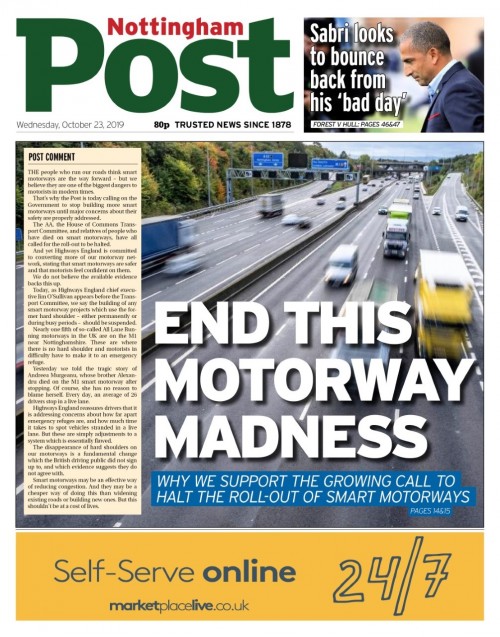 He said: “We started looking at the safety of smart motorways at the beginning of 2018, after we ran a story based on an FOI request comparing accident figures on smart motorways with those on traditional motorways.

“Then, in December 2018, another local section of the M1 was converted into a smart motorway. The more stories we published about smart motorways, the more we realised that our readers have serious and genuine concerns about their safety.

“What’s more when we examined the evidence closely, we realised that our readers were right. It’s a complex issue. But Highways England had chosen to interpret the safety research in a way that is very narrow and potentially skewed in favour of smart motorways.,

“We’ve also been helped by the fact that Nottingham South MP Lilian Greenwood is chair of the Transport Committee and has been questioning Highways England closely.”

Alex Murgeanu died in a collision on a section of smart motorway in Nottinghamshire after apparently getting out of his van while it was on the live inside lane.

Mike added: “He was a Romanian national so it took us some time to set up an interview with his sister, in Romania.

“But this week we published a very moving piece with her. Then the following day we carried a front page comment, calling on Highways England to rethink its roll-out of smart motorways.

“We’re happy that the Transport Secretary has now announced a review of smart motorways. It’s definitely a victory for common sense. And our readers can be pleased that their concerns have been taken seriously.”

Speaking to MPs on the Commons Transport Select Committee, Mr Shapps said: “I have asked my department to carry out at pace an evidence stock-take to gather the facts quickly and make recommendations.”

He added his department would lead the review “because some of the statistics have been difficult to understand, and we know people are dying on smart motorways”.