A regional daily has vowed to fight for change on so-called “smart motorways” after a crash on its patch.

Sheffield daily The Star has launched a campaign to improve motorway safety after a motorist had to be airlifted to hospital on the M1 near Sheffield.

The latest crash and launch of the campaign provided a splash for The Star on Monday, pictured below.

In an accompanying editorial, Star editor Nancy Fielder described smart motorways, on which sections of hard shoulder have been converted into running lanes, as “a perfect modern day oxymoron”. 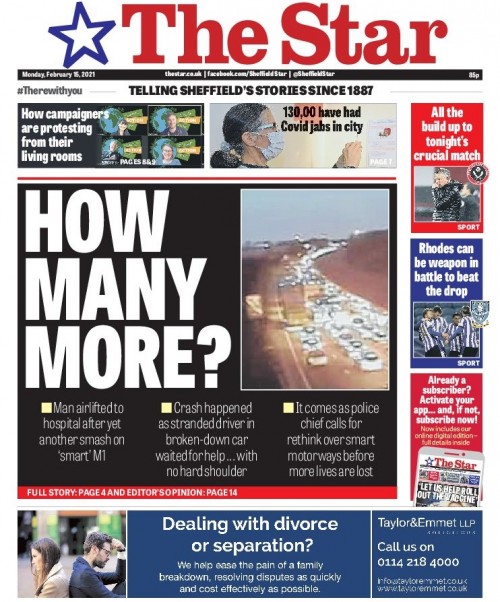 She said: “We have already had deaths and heard a tragic case of a motorist waiting for as long as 16 minutes before a fatal collision.

“We are still to see whether charges will be brought against Highways England in connection with that awful incident. When is enough enough?

“This weekend, another motorist had to be airlifted to hospital and again we have to ask if there was anything that could have been done to prevent another horrible smash.”

HTFP reported in 2019 how Transport Secretary Grant Shapps had launched a review into smart motorways less than 48 hours after a front page plea by the Nottingham Post.

In her editorial, Nancy added: “I understand why lots of you tell me that you are too afraid to use these sections of roads and The Star will be fighting for change on your behalf.

“In the meantime, all our thoughts are with those who have been injured or lost loved ones. We need change quickly.”

The Department for a Transport declined to comment when approached by HTFP.