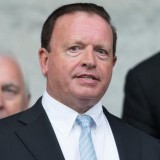 A football chairman who banned a regional daily journalist from his club’s stadium has now hit out at a colleague of the reporter in an online rant.

HTFP reported last month how Bolton News chief football writer Marc Iles had been banned from Bolton Wanderers’ University of Bolton Stadium by chairman Ken Anderson, pictured, after posting a tweet about a player pay dispute which made light-hearted reference to the film The Muppet Christmas Carol.

Mr Anderson has now escalated his criticism of the News, posting a rant on Wanderers’ official website earlier this week in response to a tweet published by Neil Bonnar, the newspaper’s head of sport, in which he said he had hoped the result of Saturday’s FA Cup tie against Walsall would be the “worst possible” for the chairman.

In a subsequent opinion piece, published on Monday after Wanderers won the match 5-2, Neil rejected claims that he was implying that he wanted the team to lose.

However, the comment piece prompted Mr Anderson’s response on Wanderers’ website, in which he suggested Neil might be “better off letting his colleagues write about the club going forward” and also claimed that Marc’s ‘Muppet’ tweet had been the “last straw” following the publication of what he has alleged were “factually inaccurate stories”.

In his piece, Neil wrote: “So why did I want the worst possible result for Ken Anderson? A great many reasons wrapped up in one package with a label saying I don’t think Wanderers are in good hands. If you think this apparently sudden outburst against Mr Anderson is because he has banned The Bolton News’ long-time Wanderers reporter Marc Iles from the ground you would be partly right.

“Marc said in his excellent piece the day after the ban was announced he believed Mr Anderson had been looking for a reason to ban him. I agree. There had been a clear warning a few days earlier so the ban came as little surprise. Nor was it a surprise that Mr Anderson’s stated reasons were flimsy and vague to say the least and contained no detailed evidence. No surprise there. Since he took over as owner and chairman Mr Anderson has had a lot to say but told the people of the town nothing.”

In November the News had taken Mr Anderson to task on the pay dispute which led to salaries being overdue, with a comment piece written by Marc under the headline ‘Enough is enough’ in which he called on the chairman to give readers a “truthful and straightforward explanation of Wanderers’ financial situation.”

Adding that he “fears for the club” over its financial difficulties, Neil concluded: “I would fear for it a little less if Mr Anderson admitted it was a mistake to ban Marc, and would be open to questioning by the media and fan groups.  But until that happens I’ll be wanting the worst possible results for Mr Anderson – as long as they are in the best possible interests long-term for Wanderers.”

Mr Anderson wrote in response: “I do accept what is often described and referred to as Hollywood licence by the press, but on a number of occasions l truly believe that Marc’s journalistic licence has overstepped the mark, particularly when it comes to being factually accurate and fair and balanced and l would remind him of his duty of care to ensure that his comments and stories are factually correct and representative of the truth.

“I have previously referred to the damage these irresponsible and factually incorrect comments do to the club and its associated businesses financially and hope that this will be fully considered in future. I have no problem with answering questions about the club from the press and our supporters within reason and have always done my best to be as open and as transparent as possible in my regular meetings and communications with our loyal supporters.

“All l would ask for in return is that the Bolton News provides fair and balanced comments and refrains from writing inappropriate sensationalist headlines and constantly repeating factually incorrect comments.”

Discussing Mr Anderson’s comments, Karl Holbrook, editor of the News, told HTFP: “It’s disappointing that we have become such a big part of this saga when the real issue is the precarious state of our proud, historic football club. We remain committed to covering what is going on and try not to rise to the bait to make the story about us.

“Such diversions distract from the real issues, which Neil, Marc and the rest of the team remain committed to covering fairly, and accurately.”