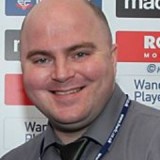 A sports journalist has been banned by a football club after he attached a light-hearted clip from the Muppet Christmas Carol to a tweet about a pay dispute.

Bolton Wanderers has told the Bolton News that chief football writer Marc Iles, left, is no longer welcome at its University of Bolton Stadium,

The ban, imposed by club chairman Ken Anderson in an email to the newspaper this morning, follows a Twitter post by Marc in which revealed that Wanderers’ players and coaching staff had been paid their overdue November salary today.

The post was accompanied by an image from the 1992 film ‘The Muppet Christmas Carol’ featuring Michael Caine, playing Ebeneezer Scrooge, and the subtitle ‘God bless us, everyone.’

I understand Wanderers' players and coaching staff have been paid their overdue November salary this morning. #bwfc pic.twitter.com/ICDdLBBJx3

In its email to the News, the club said its had found Marc’s post “offensive and amateurish” and added it had harboured “concerns over the tone and accuracy of his reporting over a long period of time”.

In November the News had taken Mr Anderson to task on the pay dispute which led to the salaries being overdue, running a comment piece written by Marc under the headline ‘Enough is enough’ in which he called on the chairman to give readers a “truthful and straightforward explanation of Wanderers’ financial situation”.

“I’ll probably be speaking to [Mr Anderson] later on this afternoon, that’s all I can say on the matter.”

The ban means Marc will not be granted access for home fixtures of pre-match press conferences.

Bolton News editor Karl Holbrook told HTFP: “We stand firm in our commitment to report to the fans, not the chairman.

“Marc is a fantastic reporter, who pours his heart and soul into Wanderers and will continue to do so, with or without special access.

“We are proud of Marc’s coverage and we are proud to independently cover our great, historic club. We fight on.”

Last month Marc was also a finalist in the Football Journalist of the Year category at the Northwest Football Awards – losing out to Matt Scrafton, of Blackpool daily The Gazette.

HTFP has approached Bolton Wanderers FC for a comment.