A regional editorial chief has defended the story of a four-year boy found sleeping on a hospital floor amid claims by “dark forces” that it was faked.

The story was swiftly followed up by the Daily Mirror and came to dominate yesterday’s general election exchanges, with health secretary Matt Hancock making an unscheduled dash to Leeds and PM Boris Johnson grabbing a TV reporter’s phone after being asked about the issue.

There have also been claims on social media that the story amounted to “fake news” and that the picture of Jack was “set up” by his mother and Labour-supporting hospital staff.

But JPIMedia Yorkshire editorial director James Mitchinson has now penned a detailed response to one reader who had been taken in by what he called “cynical social media messaging driven by dark forces.”

In a letter to the reader, a copy of which he has subsequently tweeted, James made clear the story had come via direct contact with Jack’s mother and had been checked with the hospital for accuracy prior to publication.

Wrote James: “We went to great lengths to establish the story was true and to check that the hospital accepted as much.”

A Facebook account which had sought to discredit the story has since been deleted, with its owner, Sheree Jenner-Hepburn, claiming it had been hacked.

Dan has also tweeted about the story in response to what he described as “some tweets/accounts doubting the basis of it.”

“No story would ever be published by @LeedsNews  without full verification. This was in no way staged, and highlights the need to check all accusations to avoid any miscommunication,” he wrote. 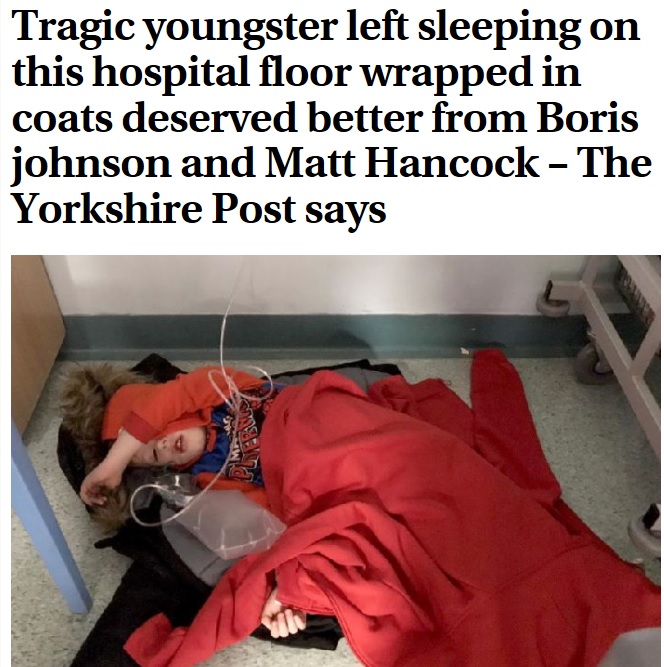 In an editorial on the affair, the Yorkshire Post was strongly critical of both Mr Hancock and Mr Johnson for their response to the story.

“It is difficult to know what is the greater scandal– the pitiful plight of four-year-old Jack Williment, sleeping on the floor of Leeds General Infirmary with suspected pneumonia due to a shortage of beds, or the arrogance of Boris Johnson and Matt Hancock,” it said.

“Rather than showing some compassion, the Prime Minister took a reporter’s phone and put it in his pocket after initially refusing to look at a photo of Jack. He later tried to play down his actions, and trot out his party’s standard soundbites, as the scandal followed him across the North.

“Then there was the cavalier response of Matt Hancock, the Health and Social Secretary, who made an unscheduled visit to Leeds. This had all the hallmarks of a self-ingratiating politician putting his party’s best interests – namely closing down this scandal – before those of patients having to wait in corridors for beds.”

The story spawned a further “fake news” row after senior Tory sources claimed that one of Mr Hancock’s aides had been punched by a protester outside the hospital.

However footage of the supposed confrontation later clearly showed it to be accidental.

The Tories were then accused of using the alleged incident as a so-called “dead cat” story to deflect attention from the plight of the sick four-year-old.

“The Tories are so desperate to distract from a four-year-old boy sleeping on a hospital floor because of their cuts to the NHS that, once again, they have resorted to barefaced lying,” a Labour spokesperson said.