Anyone who’s ever worked in the regional press will love John Lamb’s rolling reminisces about the characters he’s met and stories he’s watched breaking during nearly six decades in the trade.

Telegraph People is a new book based on John’s journeyman career in journalism which included three spells at the eponymous Coventry evening, starting as a copy boy in March 1960 at the princely sum of £3.10s.0d a week.

He’s even unearthed his letter of appointment from 59 years ago which itself is a relic of how things used to be, with the assistant editor’s salutation of “Dear Lamb”.

The fascinating part of this story for former and present Coventry staff is that John’s first days on the paper were before it moved to its Corporation Street base later in 1960 – a base it left in 2012 and one that’s now being redeveloped as a £120 million boutique hotel. 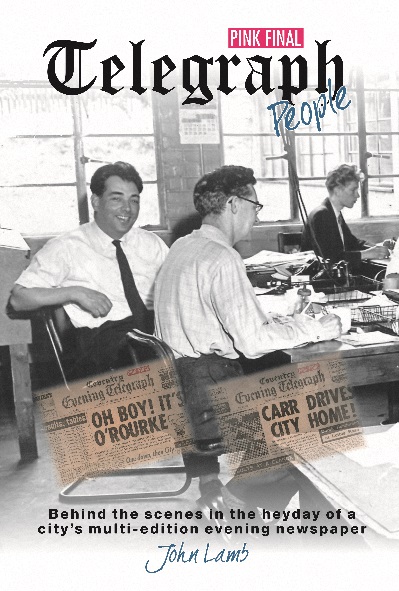 Here’s an excerpt on John’s beginnings: “On my first day, I flattened the diminutive chief sub-editor Harry Reader when he pulled open the other side of the door through which I was rushing with some late copy for the next edition. Not a good start, I thought, as I lifted the bloodied Harry, replete in a three-piece suit, onto a spare chair.”

John went on to become assistant editor at the Telegraph in a career that also saw him work on what were then both of Birmingham’s daily titles, London’s own two evening papers and most of Fleet Street.

And he’s still knocking out, subbing and crafting headlines for stories today as director of  press and PR at Greater Birmingham Chamber of Commerce.

But back to the early 1960s, and Telegraph People reveals some of the great characters the then teenaged John watched in awe.

People like sub-editor Barrie Clarke whose tea was one of 12 cups John had to brew on the hour, every hour: “Barrie Clarke took eight (yes!) spoons of sugar in his black tea. I learned that many years later his teeth did, indeed, turn black and drop out.”

And how about sub-editor Syd Fairlie, who tri-cycled into the office each day from Leamington, then freshened up by bathing naked in the large communal washroom supposedly designed for groups of printers to wash their inky hands.

Then there was deputy editor Donald Beese, a heavy smoker who would often set his waste paper basket alight, dial John’s number and shout “Fire!”, at which the youngster would have to dart into his boss’s office to douse it with a jug of water.

John went on to earn his reporting stripes and NCTJ Proficiency Certificate at The Kenilworth Weekly News, picking up tips from eccentric editor Charlie Porter.

Charlie loved punny, rhyming headlines such as: ‘Car in ditch – broken snitch’, after a driver who broke his nose when his car crashed into a ditch, and ‘Bear Virgins and Lion reach spicey finale’ on a report about three pub teams reaching a darts final (the comma after ‘Bear’ cheekily chipped off on the stone).

He also owned a free-flying budgerigar that would perch on John’s head during copy clinics, leaving its deposits all over his shoulder.

During his second stint at the Telegraph, John went to the canteen for lunch with sports desk colleague Charlie Tibballs who devoured a plate of fish and chips before taking out his false teeth and licking them clean.

At the time, the Telegraph had seven editions and sold around 120,000 copies a day, staffed by an editorial department of nearly 100 – and the stories that John saw being clinched and missed feature throughout his book.

From man’s landing on the moon to the day that John Lennon’s killing was underplayed, and from why The Specials were cold-shouldered by the paper to how a ‘Shots fired at the Queen’ sensation was missed – John tells all in great detail, but I don’t want to give any more away.

In short, John’s book is a bit like a real-life version of a David Nobbs’ novel, full of great characters and stories which I think will ring bells for older journalists everywhere.

• Telegraph People is published by Takahe and was launched on 7 September at the Royal Oak in Earlsdon, Coventry. Copies are available in Midlands bookshops and on Amazon for £10.95