Daily wins four-year fight to get justice for murdered pets

A regional daily has succeeded in its bid to close a legal loophole which saw a pet killer escape justice.

The Greenock Telegraph launched its Justice for Pets campaign in 2015 after it revealed a man suspected of bludgeoning defenceless animals to death with a golf club at a petting zoo on its patch would not face justice.

Detectives investigating the 2011 crime found DNA evidence in 2013 directly linking a then-18-year-old man to the offence, and duly arrested him – but prosecutors were powerless to take the case any further because the breakthrough in the case came more than six months after it was committed.

Now the Scottish government has announced its intention to introduce an amendment to the Animal Health and Welfare Act which will remove a time bar restriction on prosecutions. 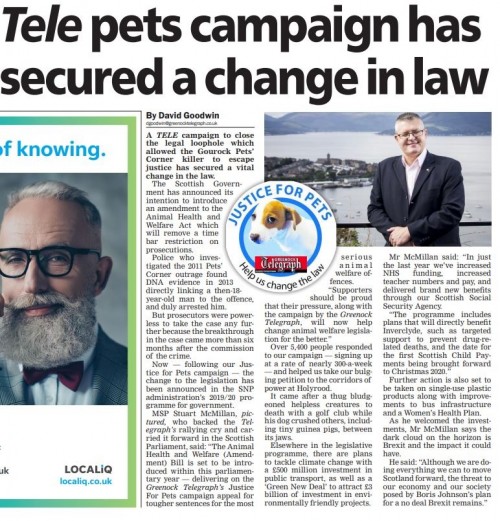 How the Telegraph covered the campaign victory

MSP Stuart McMillan, who backed the Telegraph’s rallying cry and carried it forward in the Scottish Parliament, said: “The Animal Health and Welfare (Amendment) Bill is set to be introduced within this parliamentary year — delivering on the Greenock Telegraph’s Justice For Pets campaign appeal for tougher sentences for the most serious animal welfare offences.

“Supporters should be proud that their pressure, along with the campaign by the Greenock Telegraph, will now help change animal welfare legislation for the better.”

The campaign was backed by more than 5,400 readers.

Editor Brian Hossack told HTFP: “The Greenock Telegraph has always had a proud campaigning history and this success is right up there with our top achievements.

“This is the culmination of three years of hard work by our superb team, led by senior reporter David Goodwin, to secure this change in the law.

“It is proof that great journalism can still make a real difference to our communities.”