Councillor who moved 400 miles away to keep allowance, daily reveals

A regional daily has published fresh revelations about a councillor who ignored its journalists when he refused to give up his seat – despite moving 400 miles away.

The Cambridge News has revealed Donald Adey is the only one of 61 sitting members of Cambridgeshire County Council not to give up part of their allowance in solidarity with staff on the authority, who have been told they must take three days of unpaid leave this year.

Councillors get a basic allowance of £4,677 from the city council and more than £10,000 from the county counci, but all except Cllr Adey have agreed to a 1.2pc reduction.

HTFP reported in June last year how Councillor Adey was confronted by News local democracy reporter Josh Thomas after he ignored repeated requests for an interview by the newspaper, following his decision to retain his seat despite moving to Fife. By contrast, Cllr Adey did give an interview after being approached by Dundee-based daily The Courier, his new local paper. 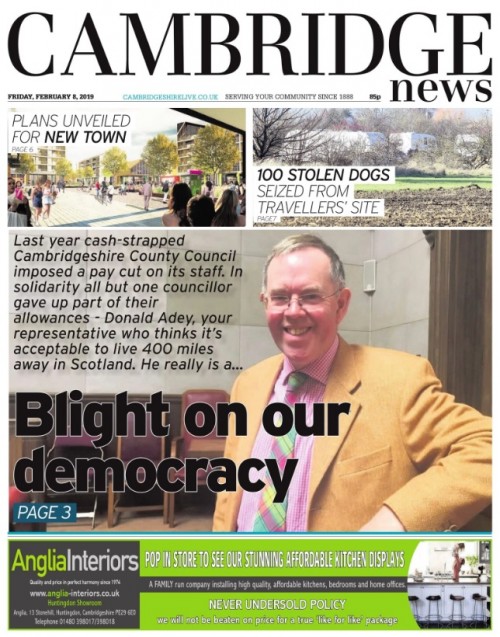 The News splashed on the latest revelations about Cllr Adey on Friday under the headline ‘Blight on our democracy’, taken from a quote about the situation by council leader Steve Count.

Josh told HTFP: “[Cllr Adey] says he can do the casework, but his colleagues tell a different story, saying they have to pick up the slack because he does nothing. And now it seems he thinks he is the only councillor who deserves to take home his full allowance.

“When I asked the council, they said democratic services had written to him to explain the situation and what had been proposed with the allowances, but that he had not responded or made any voluntary contribution.

“I can appreciate why the normally quite measured council leader Steve Count chose to express himself with some brutal words. Cllr Adey won’t want to hear it, but this is the feeling he’s provoking here in Cambridge.

“His colleagues want him gone, readers are pretty disgusted, and you have to think his ward Trumpington, where (in the spirit of full disclosure) I live, deserves a heck of a lot better than this.”