A councillor who moved 400 miles away from his constituency has quit after being repeatedly challenged about his absence by a regional daily.

The Cambridge News has celebrated “the result all our readers wanted” after Donald Adey revealed he will resign from both Cambridge City Council and Cambridgeshire County Council in his role as member for Trumpington.

In May last year, the News broke the story of Councillor Adey’s decision to keep his seat on both authorities despite having moved to Fife, in Scotland.

Local democracy reporter Josh Thomas then confronted Cllr Adey outside a full county council meeting after he failed to respond to his enquiries about his decision to stay on in the role despite the move. 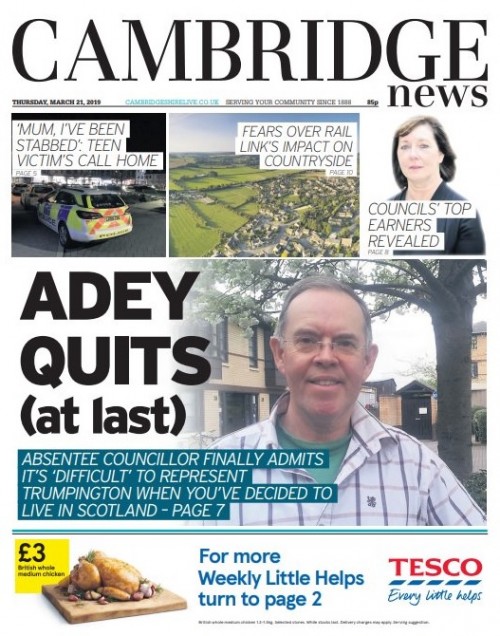 Last month Josh undertook the 800-mile round trip to Fife in order to again quiz Cllr Adey on why he had been the only one of 61 sitting members of the county council not to give up part of their allowance in solidarity with staff on the authority, who have been told they must take three days of unpaid leave this year.

Announcing his decision to finally quit both councils, Cllr Adey wrote in an email: “Yesterday the Royal Mail took charge of my letters of resignation from both councils. Representing Trumpington has proved difficult from Fife.”

Sharing the story online, Cambridge News editor David Bartlett wrote: “I’m really proud of the way we stuck with this story over the past year, and in the end got the result all our readers wanted.”

Josh left his role this month and is now working for the Press Association’s Parliamentary team as a political journalist in Westminster.

He wrote: “An incredible campaign and, at last, a great result. Fair play to [the News] for seeing this through to the end.

“I think this is why the [local democracy reporter] scheme is so important. Trumpington will have a new councillor to replace absentee Donald Adey.”