A regional daily journalist undertook an 800-mile round trip in order to get a comment from an absent councillor.

Josh Thomas, local democracy reporter for the Cambridge News and the BBC, travelled to Scotland in order to track down Councillor Donald Adey, who has retained his seat on Cambridgeshire County Council despite moving to Cupar, in Fife, last year.

HTFP reported last week how Josh had revealed Cllr Adey was the only one of 61 sitting members of the county council not to give up part of their allowance in solidarity with staff on the authority, who have been told they must take three days of unpaid leave this year.

Josh had been unable to get hold of Cllr Adey for a comment by telephone or email, and approached News editor David Bartlett for permission to make the 400-mile journey north by rail in a bid to get an interview.

David agreed it would be “worth a try”, and Josh was eventually able to track down the councillor at his new home address, providing a splash for the News on Monday in the process. 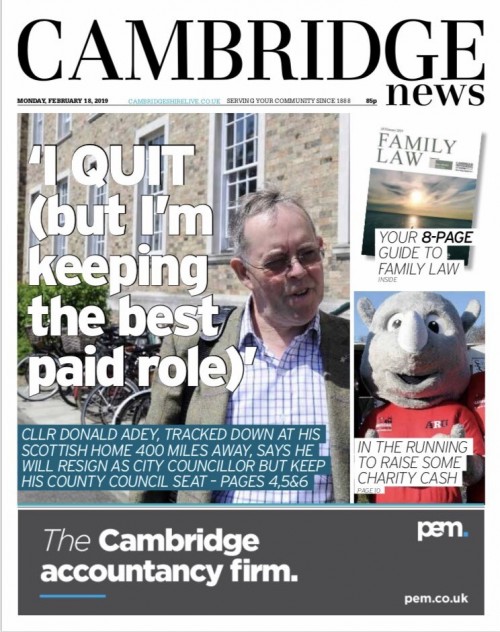 In a piece about his journey for the News, Josh wrote: “All the way to Cllr Adey’s house I was worried I’d have the wrong address. Communication hasn’t exactly been his strong point. This is the address I had found for him, but what if he’d moved without telling anyone? What if it was the right address but he wasn’t in? What if he took one look at me and slammed the door in my face? All entirely possible scenarios. Calling him to check would have been out of the question. He probably wouldn’t have answered anyway.

“I think it’s fair to say I was pretty relieved to see Cllr Adey open the door when I rang the bell. He was home! I think it’s also fair to say he was utterly flabbergasted to see me. Almost speechless. We’ve spoken before, but out of context, on his doorstep in Cupar, Cllr Adey took a moment to place me. I introduced myself properly and told him what I was about. And reader, he invited me in.

“Cllr Adey explained he wasn’t in the habit of turning people away from his door. He would not consent to filming on his property, and wasn’t keen to do a radio interview but, to his credit, he was mostly welcoming and frank during our interview while I took notes in shorthand.”

Josh quizzed Cllr Adey on subjects including his poor attendance record, unresponsiveness to the press, colleagues, and residents, as well as claims he was doing no work while still claiming more than £14,000 in allowances from both the county council and Cambridge City Council.

Cllr Adey said he planned to resign from the city council, but said he would not be giving up his Trumpington seat on the county council, and further claimed he had not seen any of the missed calls or messages Josh had left for him.

Of his decision not to give up part of his allowance, he added: “It is fair for councillors to give up their allowances. I have not given that matter any thought.

“I have married off both of my daughters last year. I have effectively been out of the country for four weeks and I have been back in the country for a very short period of time.”

Josh also documented his journey in a video, which can be viewed below, although Cllr Adey declined to be filmed.

Speaking to HTFP, he said: “I’m not really such a fan of doorstepping people, but this really was a last resort. I’d tried calling, leaving messages, and sending emails. The county council even wrote to him. Nothing. But credit where it’s due, after his initial surprise had worn off, he invited me in and did not shirk any of the questions, even if he was, perhaps, a bit careful with some of his answers.

“I think what people will be confused about is why he won’t be standing down from the county council. He admitted it’s hard to give the same service it you aren’t resident in an area, but he’ll still be carrying on as a county councillor.

“If he’s going to stay on at county, a lot of people will now be paying attention to his attendance record and the casework he’s doing. I think there is going to be more pressure than ever and he’ll need to be better at communicating if he’s going to be effective.”