A regional daily has hit out at political chiefs after repeated critical remarks were allegedly made about one of its journalists during a council meeting.

The Bristol Post has criticised Marvin Rees, directly-elected mayor of Bristol, as well as several other senior Bristol City Council figures, who joked about the credentials of local democracy reporter Adam Postans.

Adam was covering the meeting for the Post and the BBC, but Mr Rees had joked it would “be great to have a journalist here” upon seeing him present.

Starting the meeting last Tuesday, Mr Rees said he was “just joking”, but the remark and others apparently made later on prompted the post to run a front page story on the issue yesterday. 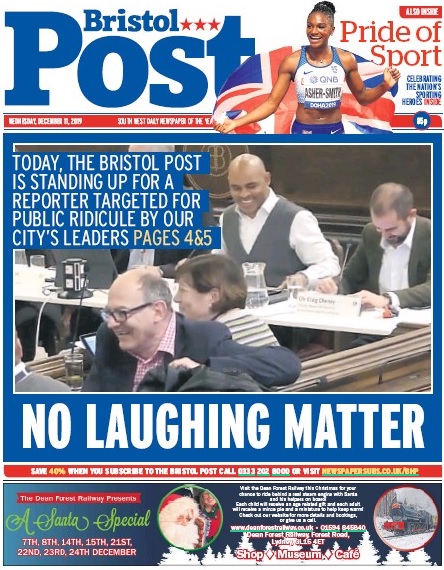 In an accompanying editorial, the Post claimed there were two further instances during the meeting of Adam being on the wrong end of “public ridicule” and said that, in another context, Mr Rees’ “attempt to publicly tarnish Adam’s reputation could be seen as slander”.

Nine minutes after his initial remark, Mr Rees said: “Might I also say to any journalists who might be listening somewhere out there on the internet that we don’t allow our political bias to be put on full display.”

The Post’s editorial stated deputy editor Craig Cheney “dutifully smirked”, with the reference to bias being “a sideswipe at Adam’s completely acceptable engagement with some of the administration’s political opponents on Twitter”.

Later Mr Rees and cabinet member for waste Steve Pearce both “deliberately over-emphasised” the words ‘Reuse and Recycling Centre’ as the meeting discussed a refuse facility, which the Post believes was “choreographed to ridicule Adam, who had been challenged before the meeting for referring to the facility as a ‘dump’ and a ‘tip’ in a story highlighting the fact that its cost had almost doubled”.

The Post’s editorial went on to explain Adam’s role, which he holds under the BBC-funded scheme.

It added: “Bristol City Council’s ruling administration seems to have taken great exception to this new scrutiny. Such exception, in fact, that the council complained about one of Adam’s stories to the Independent Press Standards Organisation. The complaint did not even pass the first hurdle.

“But the background to this unsavoury behaviour is irrelevant. That the people who run our city would behave in this way towards another human being, in plain sight, is reprehensible. It is an abuse of the public platform which their roles bestow upon them.

“And that’s the point here. Adam is not just a journalist. He represents the public, who pay his wages – and the wages of the people mocking him. When Mr Rees and his cronies ridiculed Adam, they were ridiculing all of us and our right to scrutinise council business.

“Adam, who has been a qualified journalist for 24 years, was the only reporter at the meeting. These people would clearly prefer his seat to remain unoccupied. They want to control the narrative of how the council’s business is reported, laced with their own nuances and no mentions of overspends or attribution.”

The incident comes after the Post apologised in October after publishing a front page photograph of Mr Rees which was likened to a “criminal mug shot”.

A spokesperson for the mayor said: “Just like journalists do, it is important that councils and public bodies challenge reporters when we feel the public have been misinformed or confused.

“This year we worked with dozens of journalists and media outlets from around the world and welcome the service and scrutiny their reporting provides.

“But, when a journalist becomes an activist and enters the field of play, they should not complain when they get tackled.”

A BBC spokesperson said: “Local democracy reporters perform a vital public service. We fund the reporters who are employed by local news providers who know the high journalistic standards we expect. This is something we monitor.

“We have no concerns about the reporting here. If others disagree, there are appropriate channels to raise concerns. We note the press regulator IPSO has thrown out a complaint in this case.”