A regional daily’s editor has said sorry for publishing a front page picture of a city’s black mayor which has been likened to a “criminal mug shot”.

Mike Norton has apologised after the Bristol Post drew criticism for its portrayal of Bristol’s directly-elected mayor Marvin Rees when it splashed on his ‘State of the City’ address.

It is the second time such an apology has been issued by the Post, which last year said sorry on its front page for a 1996 splash it had run which featured headshots of black men looking like “slaves in cages”.

The front page featuring Mr Rees, published on 17 October and pictured below, was criticised on social media last week by, among others, Bristol’s deputy mayor Asher Craig and NHS leadership academy head of inclusion Tracie Jolliff, who described the image as looking “like a criminal mug shot”. 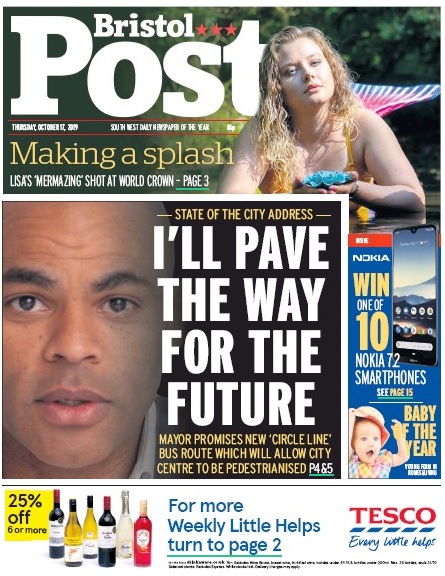 Mike initially defended the front page, saying on Twitter the tight crop picture was “standard” on page one and branding the criticism “beyond ludicrous”, but he has now issued an apology in a Post piece which stated the splash had “angered many people” in the city’s black, Asian and minority ethnic communities.

The article included an explanation about why the image was deemed offensive from Sandra Gordon, of Bristol’s Commission for Racial Equality, who wrote: “It was offensive because it was not fitting for our first black mayor, a role model to many, our current city leader who was addressing our city about its most important issues and challenges. It was not appropriate. It didn’t give Bristol Post’s readership the right message about Marvin’s position in the city and about the importance of his role or of this address.

“Nor did it promote a positive image for our local black readership so they feel this paper represents their community and justly portrays black leaders as they present white leaders – as people of influence with important roles in our city. This is not about not being able to take criticism or black people being ‘too sensitive’. It is about just, accurate, appropriate media representation of our successfully diverse city.

“If in doubt, just Google Bristol Post images of our city’s white politicians and leaders. George Ferguson – our last mayor – was portrayed in respectful stances, smiling, in front of Bristol iconic buildings, talking or gesturing in leadership fashion to his audiences. You can’t find a close up image of him, looking severe, downcast and completely irrelevant to the event being written about.

“It is a shame that a positive, factually correct article was marred by a poorly judged offensive depiction of our mayor. The Commission would welcome acknowledgement of the concerns raised and an apology.”

In response, Mike said he appreciated the Commission’s “measured response” on the matter.

He said: “Unfortunately, my first instinct on Twitter was to defend the page and the use of the picture. Partly because I didn’t see what its critics saw – which I accept is part of the problem – but also because I felt that some of the criticism was disingenuous, using the page to make wider, personal insults.

“But that knee-jerk reaction was ill-judged. In short, we got it wrong again with this page and I apologise for that. Of course, there was absolutely no deliberate attempt to undermine Marvin Rees in the way in which his portrayal has been perceived. But perception is key here and, frankly, this organisation reaps what it has sown in that respect.”

In 2017 the Post officially backed the ‘Year of Change’ campaign, aimed at tackling the under-representation of ethnic minorities in the city, with Mike admitting at the time that the paper had “too few” ethnic minority journalists and had historically contributed to a “cultural divide” in Bristol.

And last year he warned Bristol City Council employees that the Post was “watching” them, after an investigation by the paper uncovered a host of complaints of racist bullying at the authority.

In his response to the Commission, Mike added: “Our mistake is doubly frustrating because the Post’s participation in [Year of Change founder] Roger Griffith’s excellent Year of Change project has indeed brought significant change to our editorial thinking, our content and our recruitment of staff.

“In particular, we have added an extra layer of consideration to our editorial decision-making around the portrayal of BAME people in the paper and online.

“But our thinking fell short on this occasion. What should have been a positive page about a black leader’s vision for our city was undermined by the way we presented it. We will work even harder to ensure that doesn’t happen again.”