An experienced regional daily editor has announced via Twitter that he is leaving the position after six years.

Mike Sassi, editor of the Nottingham Post since 2013, says it’s ‘time to exit stage left’ after a 31-year career in the regional press.

After starting out as a trainee on the Derby Telegraph in 1988, Mike rose rapidly through the ranks of the old Northcliffe group to edit first the Lincolnshire Echo and then Stoke daily The Sentinel before moving to Nottingham. 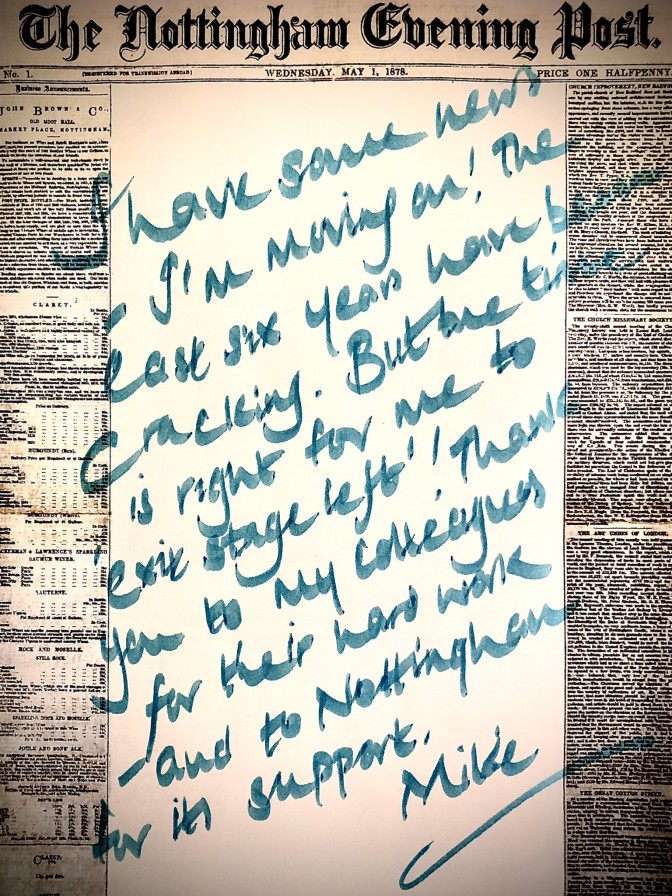 In it Mike thanked his colleagues for their support saying: “The last six years have been cracking. But the time is right for me to exit stage left.”

He will be replaced by Natalie Fahy, currently the digital editor of the Post’s companion website Nottinghamshire Live.

“I have seen first hand why Mike is regarded as something of a legend in the trade: incredibly passionate, exuding boundless energy, fiercely proud of his team and the journalism they create; a real role model of an editor.  He will be very much missed and I wish him the very best.”

Mike, who will leave the Post at the end of the month, spent four years at Derby under the editorship of Neil Fowler and Mike Lowe before leaving to become news editor at the Express & Echo in Exeter.

He moved on to be news editor and then assistant editor at the South Wales Echo in Cardiff in 1993, before returning to Derby as deputy editor in 1997.

He took up his first editorship at Lincoln in 1999 before succeeding Sean Dooley at the Sentinel in 2007.

Some of Mike’s former colleagues have already begin paying tribute to him via Twitter.

Mike Lowe commented:  “The loss of another excellent (Derby-trained!) editor. Nottingham and regional newspapers will be poorer without you, mate.”

Current Sentinel editor Martin Tideswell, who worked under Mike in Stoke, added: “Thank you…for championing Stoke-on-Trent and for keeping it real in an ever-changing journalistic landscape.”

Natalie started her career on weekly newspapers in the West Midlands and London, before moving to the specialist Royal Courts of Justice agency Strand News and freelancing at several national newspapers.

She worked at German daily newspaper Bild, then on the digital desk at Sky News, and took up her current role in Nottingham seven years ago.

Said Natalie: “I am excited to head-up the hugely-talented team here in Nottingham.

“We’ve gone from strength to strength this year and I can’t wait to see what the future brings.”