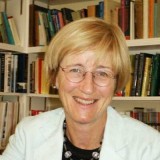 A wide-ranging report on the future of news provision in the UK has recommended the setting up a new body to oversee ‘public interest news’ which would be independent of the media industry.

In a long-awaited report published this morning, Dame Frances Cairncross also recommends an expansion of the BBC local democracy scheme, an investigation into whether the BBC website has gone beyond its remit, and greater regulation of the tech giants.

But her most radical proposal would see public interest journalism being overseen in the long-term by a publicly funded Institute for Public Interest News rather than by commercial publishers.

Dame Frances, pictured, said that given the evidence of “market failure” in the supply of public interest news, public intervention may be “the only remedy.”

Under her proposals, the new Institute would ultimately take over the running of the Local Democracy service from the BBC and the News Media Association.

The scheme currently funds 150 reporters in local newsrooms with a remit to cover local councils and Dame Frances is recommending it should be significantly expanded in future.

As exclusively reported by HTFP yesterday, local publishers had said in a joint submission to the review that more than 1,500 ‘public interest journalists’ were needed to ensure full coverage of all 800 local councils and 400 courts.

But although today’s report appears to recognise the need for such an expansion, it stops short of saying how it should be funded. 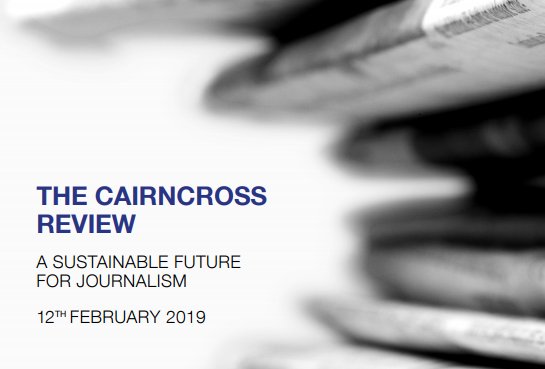 In her 157-page report, Dame Frances likened her proposed Institute for Public Interest News to the Arts Council, channelling a mixture of public and private finance into “those parts of the industry it deemed most worthy of support.”

She said: “Its governance should ensure complete freedom from any political or commercial obligations, and its strategic objective would be to ensure the future provision of public-interest news,” she said.

“It would become a centre of excellence and good practice, carrying out or commissioning research, building partnerships with universities, and developing the intellectual basis for measures to improve the accessibility and readership of quality news online.”

“The cost of investigative journalism is great and rarely seems to pay for itself … given the evidence of a market failure in the supply of public-interest news, public intervention may be the only remedy.”

Among her other key recommendations is an investigation by the Competition and Markets Authority into the online advertising industry, greater regulation of online platforms to guard against fake news, and extending the zero-VAT rating of newspapers to digital publications.

She also urges media regulator Ofcom to assess whether the BBC website is “striking the right balance” between building its own audience and driving traffic to commercial publishers, suggesting the corporation should “do more to share its technical and digital expertise” with local publishers.

The Society of Editors has welcomed the report’s calls for the digital giants – Google, Facebook and Apple – to work more constructively with the media industry and proposals to seek new, innovative ways of funding quality news production.

But it stressed that it was keen to ensure that plans for the new Institute for Public Interest News do not damage “the vibrant and independent media industry in the UK.”

Executive director Ian Murray said: “It is extremely gratifying that Dame Frances and her panel have underscored the need to protect and indeed reinvigorate the reporting of local democracy and open justice, areas which have suffered and continue to suffer as the industry contracts.

“An enlarging of the present Local Democracy Supporting Service, which sees funds from the BBC supporting around 150 local journalists covering councils, also makes sense, although again there is no indication where such funding would come from and on what scale.

“Crucial to all of the recommendations for what is really state support for the local media industry in particular, are the report’s insistence that bodies such as the proposed Institute are free from political and other interference in deciding what constitutes public interest news worth supporting.

“The Press in the UK has not fought long and hard to maintain its independence and freedom to then find itself regulated by state-appointed bodies, no matter how well-meaning was their original creation.”

“Any support must be done in a way that maximises its contribution to local journalism – and this is best done by leveraging the extremely effective and efficient infrastructure already in place in regional publisher newsrooms up and down the country.

“Diverting funds to setting up an alternative news publishing infrastructure or activities that directly compete with existing local publishers would further undermine the business model for quality local journalism and risks not being sustainable.

“We look forward to working with government on meaningful and high impact solutions that will support the incredibly important role that local publishers and their public interest journalism fulfils in communities across the length and breadth of the UK.”

The National Union of Journalists has also welcomed the report although it accused Dame Frances of portraying the BBC as a “bogeyman.”

“Dame Frances Cairncross’s report is an important piece of work which charts the demise of local journalism, the cuts to newsrooms and the loss of titles largely because of the move to digital, with people reading their news on the tech giants’ platforms, and the draining of advertising revenue to Facebook and Google,” it said in a statement.

“An institute for public interest news is an interesting idea, which recognises the market’s failure in providing public interest journalism, and an innovation fund looking at new models to redress this is welcome.

“But letting the tech giants off the hook sidesteps the real issues of how they get a free ride with the content they suck up online and disseminate on their platforms. We wish Dame Cairncross had been braver in making Facebook and Google responsible for the news they exploit.”

It went on:  “Seeing the BBC served up once again as a bogeyman and convenient cash cow is also an affront to the vital role of public service broadcasting in our democracy and its massive contribution to the broader creative industries.

“The BBC already funds the local democracy reporter scheme and its technical innovations such as the iPlayer led the way and has been used by other broadcasters.

“It’s a nonsense to suggest that BBC Online has destroyed local newspapers – as the report says, the newspaper groups went on costly acquisition sprees before the market collapsed in the late 2000s and then cut investment and sacked hundreds of journalists to maintain profit margins.

“BBC Online is a trusted and much-used source of news, it is not the problem here and its future must not be imperilled.”