Weeklies close with 16 jobs affected after death of newspaper boss

Three weekly newspapers have closed after the unexpected death of their owner – with 16 jobs affected.

The Taylor Newspapers-owned Oxfordshire Guardian series, The Oxford Paper and Basingstoke Observer have closed with immediate effect after sole owner Howard Taylor died at his home on Friday aged 63.

Howard formed Taylor Newspapers in 2012, when he bought the Observer and Guardian out of administration, saving 21 jobs at the time.

The titles had previously been run by TriMedia Newspapers, of which he was formerly managing director and chief executive. 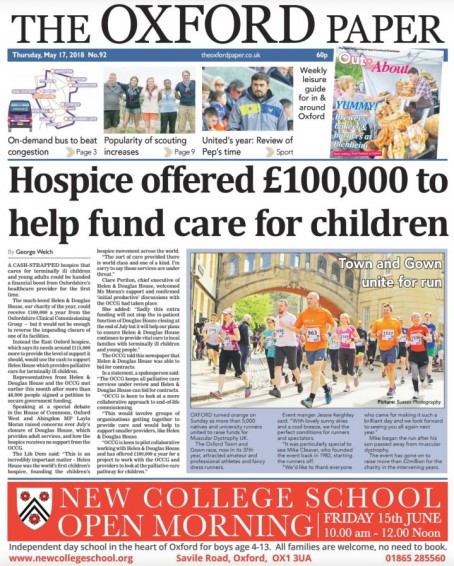 Taylor expanded with the launch The Oxford Paper in August 2016 as the company’s first paid-for publication.

In June of that year, Howard had vowed to take on regional press industry “Goliaths” with the expansion of the Guardian series to cover Henley-on-Thames.

A statement confirming Howard’s death and the titles’ closure was issued by Taylor group editor Karen Neville this afternoon.

Wrote Karen: “The decision has been made to close the Oxfordshire Guardian, The Oxford Paper and Basingstoke Observer with immediate effect following the sudden death of the sole owner Howard Taylor.

“Mr Taylor, who had owned the business for more than a decade, passed away unexpectedly at home on Friday 25 May.

“During what have been challenging times for the newspaper industry, the independent group has continued to produce quality products for the people of Oxfordshire and Basingstoke and it is with reluctance this decision has been made.”

Taylor journalists past and present have paid tribute to both Howard and the newspapers.

Oxfordshire Guardian news and sport reporter George Welch posted on Twitter: “We have given it our all and it is devastating to have such a valued paper dismantled in these circumstances. Here’s to Howard and local journalism.”

Adam Flinn wrote: “Devastated to hear this. Spent four and a half years there, my first job out of university. Thoughts with everyone affected and Howard’s family.”

And Loughlan Campbell, a press officer at the Ministry of Housing, Communities and Local Government, added: “This paper gave me my first gig in journalism and was where I formed strong lasting friendships.

“Gutted to see it close and very sad to hear of Howard’s passing. He was a lovely man and always listened to fresh ideas from reporters.”