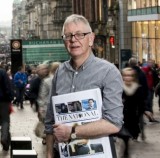 A regional publisher is set to launch two new newspapers while closing an existing title at the start of next month.

Newsquest has announced the launch of Glasgow-based titles The Herald on Sunday and the Sunday National in a move which will also see the existing Sunday Herald cease publication after 19 years in print.

Last week it was reported that Newsquest was considering merging the editorial teams of daily title The Herald and the Sunday Herald into a single seven-day operation, while Sunday Herald editor Neil Mackay announced the week before that he was leaving after almost three years in charge due to “ill-health”.

The Sunday National, which will be editorially aligned with pro-Scottish independence daily The National, will be edited by Richard Walker, while Newsquest Scotland editor-in-chief Donald Martin will take responsibility for the Herald’s seven-day operation.

Richard, pictured, previously served as editor of both the Sunday Herald and The National before taking voluntary redundancy in 2015, and has has since served as consultant editor of The National.

Callum Baird, editor of The National, said: “It’s incredibly exciting to be expanding our news operation with a new, bigger Sunday edition which will focus on investigations, big issues and have some of Scotland’s best columnists.

“This move will give our subscribers a genuine seven-day news operation for the first time and also, most importantly, ensure that there will be a newspaper which represents the views of nearly half of Scotland on the newsstands every Sunday.

“We’re delighted to confirm that the Sunday National will be edited by Richard Walker, who was the editor responsible for the Sunday Herald’s dramatic increase in circulation when it backed the ‘Yes’ campaign in 2014. There is nobody better for the job.”

A final souvenir edition of the Sunday Herald will be published on 2 September, celebrating its history and legacy as well as highlighting its award-winning front pages, design, investigations, columnists and features.

It will feature contributions from its editors Andrew Jaspan, Richard Walker and Neil Mackay.

Neil will continue to write regularly for both The Herald and the Herald on Sunday.

Donald Martin, Newsquest Scotland editor-in-chief and editor of the seven-day Herald, said: “This is an exciting time and a fantastic opportunity to produce two brilliant newspapers carefully targeted at their respective audiences. The Herald on Sunday will take the best of our journalism and columnists and offer a weekend package unrivalled for the Scottish market.

“Monday to Sunday we will produce outstanding insight, analysis and opinion, brilliant investigative journalism and great reads. We will also be careful to ensure that the balance of lifestyle, entertainment and informative reads vs news increases significantly across the weekend in line with our readers’ interests and needs.

“I am also pleased our subscribers will now have a consistent seven-day offering, both online and print, aligned to the core Herald brand.”

Further details on the content and design of both new titles will be revealed later next week.

Newsquest says the move follows market research and feedback from readers and advertisers that their needs were “not being fully met” on a Sunday.

Newsquest Scotland managing director Graham Morrison said: “This is a highly competitive industry and to be successful requires innovation, diversification and investment to ensure we deliver the media and marketing platforms our customers want.

“It has been clear for some time that Herald readers wanted a 7-day offering with closer alignment of the brand and the title’s editorial values on a Sunday. By launching The Herald on Sunday and extending the National title to seven days a week we are able to give our audience and advertisers a clearer and better choice.”