Newspaper bids farewell to readers after 19 years in print

A newspaper has bid farewell to readers with a special edition after going to print for the last time.

The Sunday Herald has closed after 19 years following a decision by Newsquest to replace it with two new Sunday titles – The Herald on Sunday and the Sunday National.

The Glasgow-based Sunday Herald bowed out yesterday with a souvenir farewell edition featuring some of its most famous front pages.

They included a splash revealing the newspaper’s backing for Scottish independence, and its decision in 2011 to identify Ryan Giggs as the footballer who had obtained a super injunction. 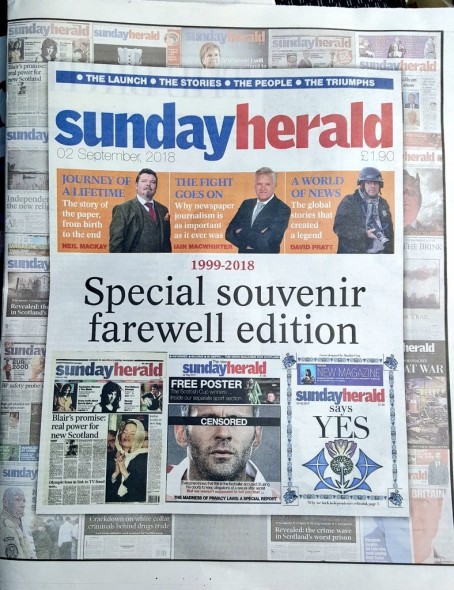 Neil announced his departure from the role last month due to ill-health, but will continue to write for the paper’s surviving sister titles in Glasgow.

Of his time in charge, Neil wrote: “Like all papers in Scotland, sales were declining and those at the head of the company felt that the gulf in values between the Sunday Herald and The Herald was to blame.

“The issue of the differing ‘brand values’ of the two titles was something that I had been asked to think about by senior Newsquest management since I took the job of editor nearly four years ago.”

The launch of The Herald on Sunday will see Newsquest’s daily and Sunday editorial operations in Glasgow merge into a single seven-day outfit, with the paper being editorially aligned with the daily version of The Herald.

Neil added: “To be honest, not all staff are happy about the merger of the Sunday Herald and The Herald – but that is to be expected. Some, understandably, feel a strong emotional attachment to the paper and are sad to lose a title they love.

“For me, I believe the spirit of the Sunday Herald will live on wherever the people who worked for it are found – whether in Australia, London, New York or Glasgow.”

The new Sunday National will be editorially aligned with pro-Scottish independence daily The National, and will be edited by Richard.

In his piece marking the Sunday Herald’s closure, Richard wrote: “It’s been a difficult time for those who worked on the Sunday Herald and who this weekend will watch it sink below the waves.

“Both support progressive policies, both back social justice, both see independence as means to create a better, fairer, happier country rather than an end in itself. It is the only way to forge the country we believe Scotland can be.”