Editor quits newspaper in bid to run for political office

An editor has revealed he is leaving his role as he launches a bid to run for political office.

Richard Walker has announced he is stepping aside as editor of Glasgow’s Sunday National ahead of a campaign to become the Scottish National Party’s candidate for Member of Scottish Parliament in the Ayr constituency.

Richard had edited the pro-Scottish independence Sunday National since it was launched in 2018.

He was previously founding editor of the daily edition of The National, which was launched in 2014, and has also edited its Glasgow-based Newsquest sister title the Sunday Herald. 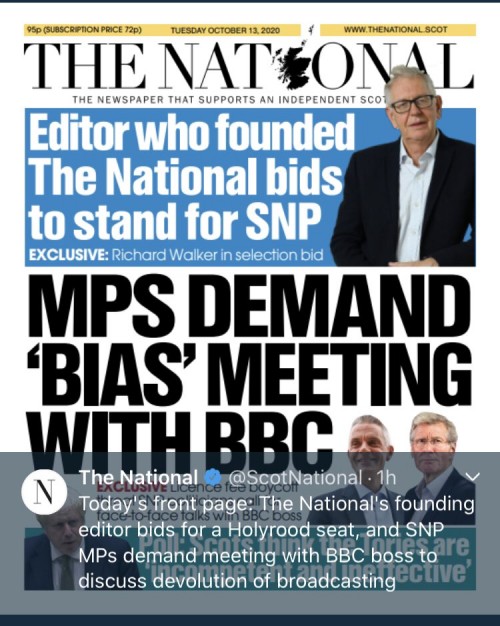 The announcement appeared on the front page of The National this morning, pictured above.

Callum Baird, currently editor of the National and Glasgow Times, will add the Sunday National to his portfolio in Richard’s absence.

Voters in Scotland are due to go to the polls on 6 May next year, and the seat for which Richard hopes to win the SNP nomination is currently held by Tory MSP John Scott.

Richard, who lives in Ayr and was born in nearby Troon, told The National: “I am taking a step back from the Sunday National. I think that is the right and fair thing to do.

“I wouldn’t want to be making editorial decisions about selection contests.

“The very nature that there would be a perception of a conflict suggests that I should take a step back.”

As editor of the now-defunct Sunday Herald Richard committed the title to supporting independence – making it the only newspaper in Scotland to do so ahead of the 2014 referendum.

He said: “I have been campaigning for independence since before the 2014 referendum bringing the Sunday Herald for Yes and founding The National and The Sunday National.

“I believe I have a lot of ideas, experience and skills which I would like to put at the disposal of the SNP and the wider Yes movement.”

Richard added: “I think we will see Scotland become independent following a second referendum. What better prospect than to be part of a parliament which helps to shape the new Scotland once independence is won.

“I want to see a Scotland that can take the best decisions for the people who live here and a Scotland that isn’t beholden to a Conservative majority at Westminster that it has not voted for.”

Richard has spent more than 40 years working in newspapers, starting out working for local titles in Ayrshire before moving on to regional and national publications.

Callum said: “Richard Walker is an inspiration – a genius newspaper editor who launched both The National and the Sunday National and brought the Sunday Herald out for Yes.

“He has been nothing but a tireless campaigner for independence ever since I met him.

“He’s got our blessing to follow this dream and nothing but our best wishes. If selected as a candidate and elected to the Scottish Parliament, we’re sure he would be a huge asset to the Yes movement at Holyrood, just as he has been here.

“And don’t worry – your newspaper will be in good hands.”

Richard’s announcement came 48 hours after the Sunday National ran a spread on his partner Suzanne McLaughlin, who is also standing for selection as an SNP candidate.

The move prompted Alex Massie, Scotland editor of The Spectator, to post on Twitter: “I wonder if everyone hoping to be an SNP candidate next year will get a spread in the National or if that privilege is reserved for the editor’s partner?”

In response, Richard said: “Lots of candidates have been covered in The National and Sunday National.”