An independent publisher has launched what it has claimed is “Britain’s biggest free weekly newspaper” in a move which will see seven existing titles close and four staff leave the business.

The new publication will have five editions covering Wolverhampton, Walsall, Sandwell, Dudley and Cannock, which were all previously served by dedicated versions of the Chronicle.

Readers in Wolverhampton, Walsall, Sandwell and Cannock will continue to receive a dedicated edition but the Dudley edition will also feature news from the towns of Halesowen and Stourbridge, which previously had their own editions. 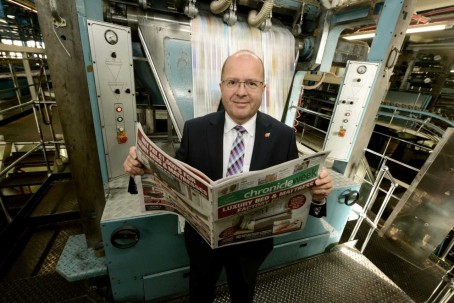 As a result of a restructure coinciding with the changes, two MNA editorial staff have taken voluntary redundancy and two other members of staff have retired.

The launch edition of Chronicle Week will be delivered to 210,000 homes and will also be on sale in more than 250 newsagents, and the MNA says local stories will feature throughout each edition along with a comprehensive round-up of the week’s regional news.

Keith Harrison, editor of the MNA’s Wolverhampton-based daily the Express & Star, said: “We are delighted with the new Chronicle Week and the prestige of laying claim to being the biggest free weekly newspaper in the UK.

“There is a focus on positive stories with human interest, alongside the hard news which readers expect from us, plus eight pages of leisure features.”

The move by the MNA echoes a similar rebrand undertaken by Reach plc’s forerunner Trinity Mirror in the Greater Manchester area three years ago.

TM launched the Manchester Weekly News in April 2015 to replace the Stockport Times, Wilmslow Express and the Advertiser series in Tameside, Salford, Oldham and Trafford.

At the time, TM billed the Weekly News as “Britain’s biggest free weekly newspaper” with it being distributed to more than 265,000 homes.

HTFP has asked Reach plc for the current distribution figure of the Weekly News in order to verify the MNA’s claim to the crown.

MNA print managing director Graeme Clifford said: “The launch of Britain’s biggest free weekly newspaper is a prime example of the MNA’s commitment to continuing to invest in print. A lot of time and hard work has gone into making this product what it is, and we are very excited about its launch.”

Alongside the new product, the MNA will continue to publish the free weekly the Stafford Express & Star.

MNA advertising director Louise Burns said: “The new print title has an improved offering for advertising which we feel will help to engage with readers in a more targeted way.

“Conversations are already under way with advertisers to update them on the changes and the new opportunity to accelerate coverage at a lower cost per thousand, which have been received positively.”