Police are probing links between an alleged paedophile ring and a gang which murdered three children following a weekly newspaper investigation.

HTFP has previously reported how Essex Police has twice decided to reopen an inquiry into allegations of offences committed against children, particularly boys in local authority or foster care, following Yellow Advertiser investigations into claims of an establishment cover-up.

Now the force has uncovered a link between the network, known as the ‘Shoebury sex ring’, and a London paedophile gang which killed three boys – Jason Swift, Barry Lewis and Mark Tildesley – in the 1980s and 1990s after the newspaper encouraged a witness to come forward.

The suspected victim of the ring was initially approached by the police in April 2017 before losing faith in the investigation, and he then spent six months talking to the Advertiser, which covers parts of East London and Essex, after finding its reports on the matter. 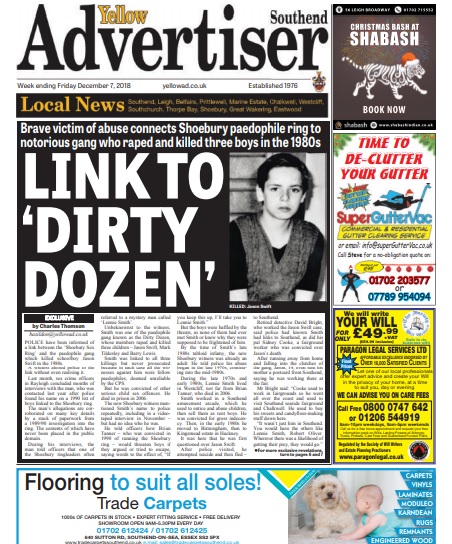 The YA discovered that many details of the man’s account were corroborated by documents it gained access to which he would not have seen, and which have never been placed in the public domain – including names of perpetrators, names of victims, details of criminal activity linked to the ring, a vivid description of the interior of an abuser’s home which matched other accounts, and some locations given by other boys.

As a result, the YA successfully persuaded the witness to go back to the police to give a formal, on-video interview, which would commence a police investigation.

He agreed in October 2017 to do that, but by May 2018, police still hadn’t arranged the interview and the YA had to find him a pro bono solicitor, who contacted police and told them if they kept putting off his official interview, he would have to file a complaint – leading to a series of interviews eventually taking place between July and last month.

Among the people the witness identified as allegedly abusing him are a police officer and two care home workers, as well as a current scout leader.

Editor Mick Ferris said: “This investigation began four years ago, almost to the day. Our work has won us a lot of accolades, but the ultimate prize would be to see justice for these children – meaning successful prosecutions, and transparency from both Essex Police and Essex County Council.

“There is no doubt that the latest complainant is credible. His account is corroborated on point after point by contemporaneous documents he has never seen. They were only unearthed after he had already given his account to the YA. He was even named at the time as a suspected victim.

“The ball is now in Essex Police’s court. One of the men this complainant has named is currently a scout leader. He first named that man to police in spring 2017, when they knocked on his door.”

In the past two weeks the YA has run four major stories about the case, while earlier this year, chief reporter Charles Thomson’s work on the investigation earned him the  inaugural Ray Fitzwalter Award for investigative journalism, providing him with a £4,000 cash prize to fund future investigations.

Mick is also calling on Essex County Council to provide the paper with a copy of the Kenward Report, an investigation carried out in 2000 into historic allegations that council child protection workers were involved in the abuse of children in care.

The paper is involved in a Freedom of Information battle with the council over the authority’s refusal to publish the report and the case is currently being investigated by the Information Commissioner’s Office.

Said Mick: “Their claim that our FoI request is both vexatious and not in the public interest is feeble and deliberately obstructive to the investigation.”

The council has previously claimed releasing the report would “prejudice the effective conduct of public affairs” by dissuading people from contributing to future investigations, adding the document contained personal data and information which had been provided in confidence.