An inquiry into historic child sex abuse has been reopened for a second time thanks to a weekly newspaper’s intervention.

Last year Essex Police announced it would probe allegations of offences committed in the 1980s and 1990s against children, particularly boys in local authority or foster care, following a Yellow Advertiser investigation into claims of an establishment cover-up.

Detectives had summoned the Basildon-based Advertiser to force headquarters in Chelmsford last week to announce the end of the investigation, codenamed Operation SANDS.

However, at the briefing, the paper handed over a document containing detailed allegations about more than 10 men and women based in and around Southend in the 1980s. 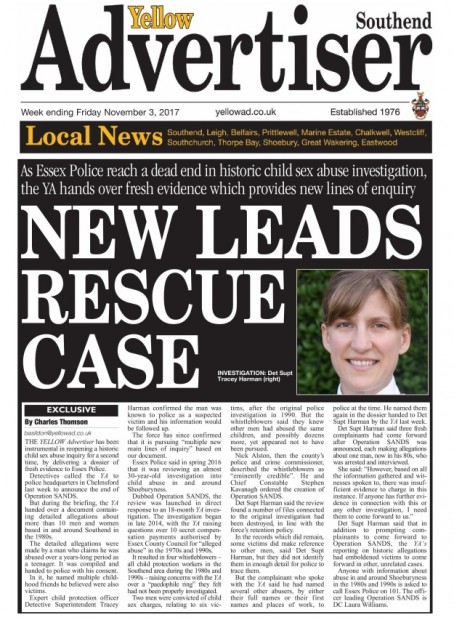 The force has since confirmed that it is pursuing “multiple new main lines of inquiry” based on the document, with child protection officer Detective Superintendent Tracey Harman confirming the man on whose testimony it is based was known to police as a suspected victim.

The Advertiser splashed on the exclusive, written by reporter Charles Thomson.

Editor Mick Ferris said: “We are pleased Essex Police has reopened the case for a second time, once again due to information brought forth by the Yellow Advertiser.

“Our historic abuse investigation began three years ago when we discovered, through Freedom of Information, a series of compensation payments authorised by Essex Council. The council refused to answer even basic questions about those payments.

“At the time, the council’s silence was infuriating. But our campaign for transparency – backed by the Taxpayers’ Alliance and child abuse charity NAPAC – prompted our first whistleblower to come forward with concerns about similar but unrelated matters. Our work with him emboldened several more whistleblowers to break their decades-long silence.

“Around 16 months after our first queries over Essex Council’s pay-outs, the commissioner of Essex Police was thanking the Yellow Advertiser as he and the Chief Constable announced the re-opening of an almost 30-year-old child sex abuse investigation. It is a great irony that Essex Council’s stubborn secrecy over one issue led to such seismic revelations about another. The story went national.”

Operation SANDS was launched in direct response to an 18-month Advertiser investigation which began in late 2014, with the paper raising questions over 10 secret compensation payments authorised by Essex Council for “alleged abuse” in the 1970s and 1990s.

It resulted in four whistleblowers – all child protection workers in the Southend area during the 1980s and 1990s – raising concerns with the paper over a “sex ring” they felt had not been properly investigated.

Two men were convicted of child sex charges, relating to six victims, after the original Essex Police investigation in 1990, but the whistleblowers said they knew other men had abused the same children, and possibly dozens more, yet appeared not to have been pursued.

Det Supt Harman said that in addition to prompting complainants to come forward to Operation SANDS, the YA’s reporting on historic allegations had “emboldened victims to come forward in other, unrelated cases”.

Mick added: “We are pleased to have been able to work effectively with Essex Police for a common good. This is one of the biggest stories the Yellow Advertiser has ever worked on, and so far only a fraction of that story has been told.

“A wealth of information remains unpublished, so as not to interfere with the ongoing police investigation. We are proud that our reporting on these matters has empowered complainants not only in the Shoebury case but also in other historic abuse cases to approach police for the first time.”