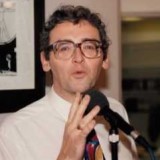 A new investigative journalism award has been launched in memory of a regional daily’s former deputy news editor.

The Ray Fitzwalter Award, which comes with a £4,000 cash prize, aims to recognise the best work by early career investigative journalists outside London.

Ray, left, worked on the Bradford Telegraph & Argus, where he was instrumental in the uncovering of the Poulson affair – an investigation into the Yorkshire architect John L. Poulson and his use of bribery to win contracts.

The scandal sent shock waves across Edward Heath’s government in the early 1970s and led to the resignation of Home Secretary Reginald Maudling.

Ray, who died of cancer in April 2016, also served as editor as ITV’s World In Action series during his career.

As well as the cash prize, which must partly be spent on an investigation during 2018, the winner will get the opportunity to be mentored by a panel of experienced investigative journalists.

The award – sponsored by the University of Salford, Channel 4, ITV, and the Bureau of Investigative Journalism – is open to early career journalists working in any medium, based within the UK but outside the capital.

Andrew Fletcher, lecturer in journalism at the University of Salford, said: “This is an important award, celebrating the often overlooked investigative journalists working outside of London.

“It’s also about recognising the importance of digging out facts, at a time when fake news and misinformation have never been more prevalent.”

Ray’s wife, Luise Fitzwalter, added: “Ray would be both amazed and slightly embarrassed about the idea but would totally approve.”

Shortlisted candidates will be invited to an awards ceremony at the University of Salford’s MediaCityUK campus on 19 April 2018, where the winner will be announced.

Click here for more information and details of how to enter.