Mike Gilson: How we uncovered scandal that was ‘bigger than Shipman’ 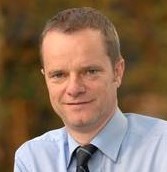 Portsmouth daily The News was yesterday praised for its prominent role in highlighting the suspicious deaths of elderly patients at Gosport Memorial Hospital on its patch and thereby encouraging whistleblowers to come forward.

Here Mike Gilson, left, who was editor of the paper between 2000 and 2006, recalls how an initial front-page story into the death of an elderly patient snowballed into a major scandal.

‘This is bigger than Shipman, honestly.’ Good reporters are renowned for their hyperbolic tendencies particularly when they sniff the front page and crime reporters are generally the worst offenders.

So it was when Jonathan Carter came into my office at The News, Portsmouth 17 years ago with these words, telling a fantastical tale of elderly patients at the Gosport War Memorial Hospital being mistreated and even killed.

Dr Harold Shipman, Britain biggest mass murderer, had of course been jailed just the year before so minds were, of course, open to the possibility. At least there was the sense that very elderly people not far perhaps from death were not treated like the rest of us. Looking back on it imagine if the Gosport War Memorial had been a baby unit. Would we have waited 17 years for the truth? I doubt it.

But even so Jonathan’s story was hard to believe. Yet like all good crime reporters he had good sources. He spent a lot of his time talking off the record to police officers. Remember those days? And he had another ace up his sleeve.

Enter the formidable Gillian Mackenzie. When her mother, Gladys, inexplicably died at the War Memorial after a routine fall at her care home, boy did the ‘authorities’ pick on the wrong woman to patronize and fob off. There’s no space here to go into Gillian’s full role in this fight but when the book is written she will be its heroine.

Jonathan had been taking calls from ‘this woman’ and she wanted to talk to me. She didn’t just want to talk, she demanded and I gave in. In truth there were times later when my PA Sarah motioned through to me that Gillian was on the phone that my eyes rolled and the non-verbal sign for ‘not in’ was employed. But the story she told and the sheer energy she had, the desire for the truth, swept us along with her.

Backed by good journalism and a newspaper team that was happy to make a nuisance of itself in the public interest we went to press. And so it was on April 3, 2001 that we broke the story that would lead to where we are today.

It’s worth just reporting a little bit of Jonathan’s story that day to see how close we were to the truth 17 years later. Under the headline Probe Into Suspicious Death at Hospital the story told of a police investigation into the possible unlawful killing of Gladys and went on: “One source told the News the deaths of as many as 600 elderly people could be re-examined. It is thought the use of the pain killing drug diamorphine might form part of any future inquiry.’ 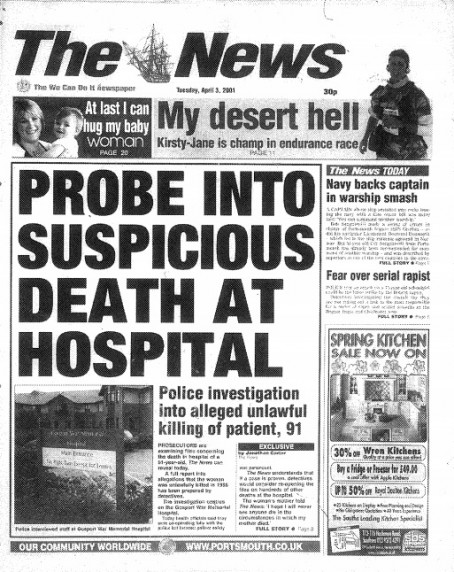 How The News first covered concerns in 2001

It still seems astonishing to me that with such a story out in the public domain the grieving relatives have had to wait until now to have the truth confirmed. Because having started we did not give up on it and the Panel Report out this week has a whole section on the media’s involvement in this story which details how often we kept banging away at this story, how concerned we were that it appeared things were being covered up, information hidden.

I was accused by one health official of placing unnecessary stress on the elderly patients of the War Memorial by running our constant stories. That is irony in 20ft neon letters.

After the initial story more relatives began to come forward and the story snowballed (we were to not to know how slow it would eventually roll forward) taking in the police and health officials who as the report now shows were simply too close to each other, our enquiries to the police going straight to the health service for instance. The less said about the then MP for Gosport, Peter Viggers, the better.

The only way we knew to keep the pressure up, and we know now behind the scenes we were making some people very uncomfortable, was to keep asking journalistic questions.

Here is an editorial after a particularly lame NHS investigation in 2002.

‘We are not looking for scapegoats. We do not say the report into deaths at Gosport War Memorial Hospital is a whitewash. But there is something uncomfortably cosy about it. Mistakes have been admitted in the provision of drugs to frail old people, yet in no instance, we are told, can we be sure those mistakes were directly to blame for their demise. To relatives and other laymen, that will be difficult to believe. And it is with both those groups that we should be primarily concerned now.’

What is heartening is that our stories did have the effect of emboldening those inside the system who knew something was wrong to come forward. A salutary lesson in these days when the democratic deficit arising from local journalism’s slow retreat from the frontline is causing real concern.

Shortly after our first story, Pauline Spilka, a nursing auxiliary, explained that reading the article had led her to come forward:

“This story has brought back some disturbing memories of incidents that occurred whilst employed at the hospital that I felt unable to highlight at the time. Having read this story I have decided that I am morally obliged to bring them up now.”

Of course I don’t claim The News did anything other than what it should have been doing. We did though go at it with a fire in the belly that makes me proud of the team even now. Primarily its shows that a partnership between people in need and public service journalism can get results…no matter how long it takes. We lose that bond at our peril.