Police to probe hundreds of hospital deaths after daily’s campaign

A criminal investigation into hundreds of deaths is set be reopened after a regional daily’s successful campaign.

HTFP reported in January how Portsmouth-based daily The News had revealed new hopes for justice for the families of patients who died after being given opioids “without medical justification” at Gosport War Memorial Hospital.

The News was praised by an independent review panel in June last year for playing a “prominent part” in making public concerns raised by families of people who died at the hospital.

It has now been announced that an independent police team led by assistant chief constable Nick Downing, from the Eastern Policing Region, will start a criminal investigation into the way staff cared for more than 650 patients who died at the hospital between 1987 and 2001. 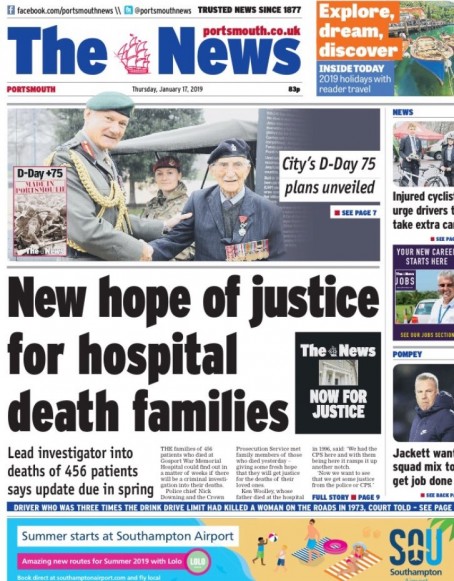 How The News covered the update in January

This will be the fourth probe into the deaths of patients who a report found had their “lives shortened” through the unjustified use of opioids.

Speaking earlier this week, ACC Downing said: “The families of those affected by the events at Gosport War Memorial Hospital are at the heart of everything we do, and I hope the news that we will now be carrying out a full investigation is of some comfort to them.

“This investigation is not about numbers, it is about people – specifically those who died at the hospital and the loved ones they have left behind.

“There have been three previous police investigations into deaths at the hospital. It was therefore important for us to carry out an initial assessment of the materials obtained by the Gosport Independent Panel to establish if it contained sufficient new information that has not already been submitted to the Crown Prosecution Service.

“Now that we have launched a full investigation we will be arranging to meet with the families on a one-to-one basis and invite them to give statements on their own experiences with the hospital, as it is their accounts about the loss of their loved ones that will help put the medical assessments we have into context.

“This is a highly complex and emotive case that some family members have been living with for more than 30 years, and I would like to thank them for their continuing patience and understanding during this process.”

Following the publication of the report’s findings in June, The News splashed with the headline ‘Now for justice’ after campaigners called for criminal prosecutions to be brought.

HTFP has approached The News for a comment on the update in the case.