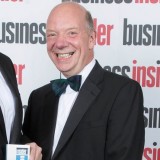 A managing director and editor-in-chief is to leave in a restructure – weeks after a daily newspaper editor who reported to him also left the business.

Trinity Mirror has announced Media Scotland MD Allan Rennie will leave the company after 24 years of service, during which time he also edited both the Daily Record and Sunday Mail.

Allan’s role will not be replaced and David will now have full control of TM’s Scottish national titles and websites.

He is the second senior editorial leader to leave Trinity Mirror in recent days following the announcement of Chris Styles’ departure as editor of the Teesside Gazette.

Allan, pictured, said: “I am so proud to have worked with so many talented people in Scotland and across the Group over the last 24 years.

“I loved my time at Media Scotland, overseeing the best national and local titles in the land and the launch of exciting new sites such as Glasgow Live.

“I would like to thank all my colleagues at Trinity Mirror for their support – and wish them all the best for the future.”

Trinity Mirror chief executive Simon Fox added: “Allan has had a distinguished career at Trinity Mirror over the past 24 years. He edited the Daily Record and Sunday Mail and served as editorial director for our national titles.

“I am enormously grateful to Allan for his leadership of the business and wish him every future success.”