Journalists at a weekly newspaper and its sister website are to be based at a nearby college from next month after plans to vacate their current office were revealed.

Staff of the Bath Chronicle and its Bath Live sister online channel are set to leave their James Street West office after 10 years for space at neighbouring Bath College.

Bath Live editor Emma Slee and Bath Chronicle editor Gavin Thompson say the move, which will take place by the end of the month, will allow the titles to “remain very much at the heart of Bath.”

But the Chronicle’s former deputy editor Paul Wiltshire has lamented the switch on his personal blog, saying the college premises “won’t quite be the same” as having a “branded, accessible base” in the city. 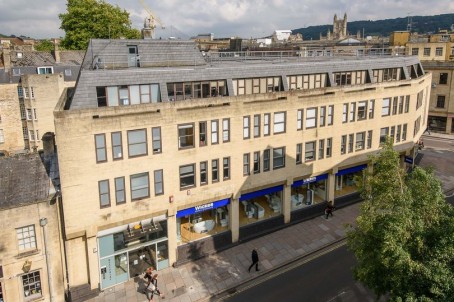 Gavin and Emma confirmed the move in a joint statement issued to HTFP, saying: “The Bath Chronicle and Bath Live teams are to relocate from the existing office in James Street West to a space within neighbouring Bath College.

“This move, which we expect to happen by the end of the month, will see our journalists and sales people retain a base in the centre of the city, just across the road from the current office.

“At the same time it helps us to operate as efficiently as possible in order to focus our resources on our journalism.

“The Bath Chronicle newspaper and Bath Live website remain very much at the heart of Bath and we are pleased to have been able to work in partnership with Bath College to achieve this.”

The Chronicle, which went from daily to weekly in 2007, moved into its current city centre headquarters 10 years ago after previously being based on the edge of the city.

In September, HTFP reported how the Chronicle’s Reach plc sister title the Torquay Herald Express, also a former daily, had vacated its office with its staff now based mainly in Exeter.

Paul, who spent 19 years at the Chronicle before moving into journalism training, wrote: “It’s a sad day, made all the sadder for its painful predictability.

“Reporters will be able to work from an area at the nearby college, and offices in Bristol or Yeovil. But it won’t quite be the same as having a branded, accessible base which is the symbolic heart of a news organisation in what has always been a city that punches above its weight.”

“When we moved into that office in 2008, we worried about how we’d fit everyone in. Ten years on, staff rattle around in half the floorspace. So I understand the business case for moving out – and I don’t blame any of Reach’s local and regional management. They are excellent people doing the very best they can.

“And I understand that a news organisation shouldn’t be confined by bricks and mortar in a digital age. Most importantly, I’d rather it was buildings being lost than people. But it’s very much the end of an era.

“In that place we brought down bullying headteachers, charted the tragic twists and turns of missing people, challenged councils and celebrated life in all its rich tapestry. We won awards and we were privileged to mark the paper’s 250th anniversary.

“I and dozens of people I still call friends had some of the most memorable days of our working lives within those walls. I’m sorry – really sorry – that a new generation of journalists won’t have quite the same shared experience.”