A hyerlocal news publisher is hoping to raise £1m this week in order to keep itself “alive”.

Ths Salford Star is running a five-day fundraising campaign under the name ‘Save the Salford Star’, which will see two auctions take place for its benefit.

One of the auctions, to be held on Sunday, will feature tongue-in-cheek lots such as “the last brick in Broughton” from a demolished house and “tickets for a social cleansing tour of Salford”.

Prior to that, an auction held on Thursday will include lots such as a signed print of Friedrich Enegls by Happy Mondays graphic artist Matt Carroll, vintage tangerine Salford City FC shirts from the pre-Gary Neville takeover and a signed Stereophonics guitar. 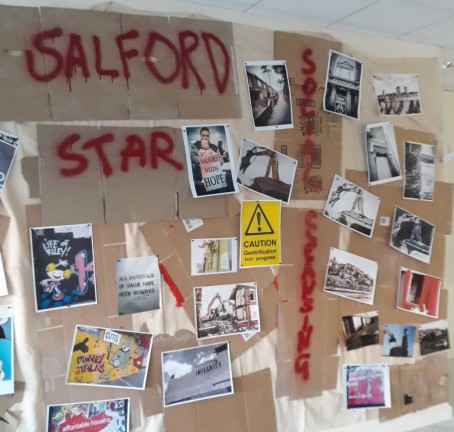 One of the displays from the Salford Star exhibition

An exhibition of the Star’s work over the past 13 years will also be displayed at Salford Shopping City, where Sunday’s auction is being held.

Star editor and co-founder Stephen Kingston said: “I know it’s a bit extreme charging over £1million for items that people may regard as worthless but for us they are our treasure… our memories, our pieces of a city fast disappearing into speculators’ pockets.

“To stay alive we have no money, only these precious artefacts. There is no media fair trade in the UK so we literally have to sell the Salford Star’s soul.

“How much is independent news worth? We believe it’s worth a million quid. Hopefully really nice people will buy something at a lesser price and look after it, knowing that they have played a part in keeping the D.I.Y. media spirit alive.”

The exhibition began yesterday and runs until Sunday.