Hyperlocal title lives on after community raises £3,000 in 10 days

An auction of industrial and cultural memorabilia has secured the future of a hyperlocal news magazine – for now.

The founders of independent monthly the Salford Star had launched an ambitious appeal to raise up to £1m by selling off a series of quirky items from the city’s recent past, saying that is the value that should be placed on independent local news.

In the event, the auction – carried out by Coronation Street actor-turned journalist Nigel Pivaro – raised £3,000 – but the publishers say that is enough to secure the magazine’s immediate future.

Among the items auctioned off was a brick from a recently-demolished affordable housing project and a fragment of the old Salford Quays cargo cranes, cleared to make way for the Media City development. 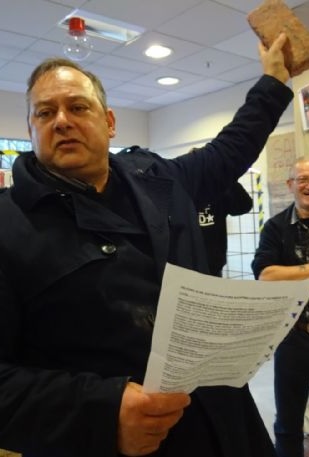 As well as the auction, cash was raised via two exhibitions featuring the Star’s work and a pop-up shop in Salford Shopping Centre.

Editor and co-founder Stephen Kingston said: “What was incredible was that this was a real community effort, from the tower block tenants across the road from the Precinct, to those currently fighting campaigns, to people who had been with the Star from Day One and others who just wondered in and liked what saw

“After this phenomenal support, we’re lost for words – except to say that the Salford Star lives on!”

Nigel, who became a journalist in 2006 and worked for the Manchester Evening News and Tameside Reporter before going freelance, added: “This isn’t just about raising money for the Salford Star.

“It’s also symbolic in terms of raising awareness of what we’ve done over the years, shining the torch where councils, developers and companies don’t like it shone.”

Other tongue-in-cheek lots for sale at the auction included “tickets for a social cleansing tour of Salford.”

However a bolt from the city’s gas holders, made famous by Ewan MacColl in the song Dirty Old Town, was withdrawn from the sale and given to the singer’s family after the MacColl Estate made an unrequested donation to the Star.