Editor wins MBE for services to his patch and charity work 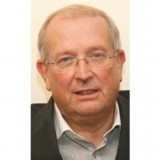 A veteran editor and newspaper publisher is to be made an MBE in recognition of his charity work and service to his patch.

It has been announced that Philip Evans will receive the award as part of the Queen’s Birthday Honours in recognition of his work in the Dorset town of Lyme Regis.

Philip, pictured, was the founding editor of the View From series, based in Lyme Regis, 12 years ago before ultimately selling the business.

After the series was shut down at the start of this year, he founded digital news title LymeOnline to serve the town.

The citation for Philip’s award recognises his “distinguished career in journalism for over 50 years.”

It states: “He has given 50 years of service to local charities and the wider community of Lyme Regis. He has often used his position to promote charities in his chain of newspapers where they could benefit from the generosity of his readers.

“For example, he raised approximately £10,000 for Waterworks Limited following requests from readers for the cost of 66 standard water survival boxes, each of which provided a water-purification kit and range of other essential survival items for displaced families.

Philip originally launched the View From series in 2005 and continued to run it under the ownership of newspaper entrepreneur Sir Ray Tindle.

Then, in 2016, Sir Ray sold the business to a management buy-out, Capital Media, in which Philip held a 30pc stake.

In July last year, the papers were bought by Peter Masters, who had earlier rescued the Liskeard-based Sunday Independent from closure, although Philip continued to manage the titles.

Most of the View From titles finally ceased publication in January, with the owners citing “falling advertising revenue and the continued difficult trading climate,” although View From Blackdown Hills is still publishing.