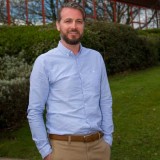 An editor is set to leave the weekly newspaper where he has spent his entire career for a new role outside the regional press.

Andy Keeble, left, will leave the North Devon Gazette at the end of September after editing the paper for the past six years.

He will take up a new post as senior PR and social media officer at Children’s Hospice South West, based in North Devon, once he leaves the Barnstaple-based Gazette.

The 41-year-old has been with the Gazette since joining as a trainee reporter in 2004, after passing his NCTJ qualifications at City College, in Brighton.

The Archant South West group editor job is currently being advertised on HTFP, and can be found here.

Andy, who is married with two sons aged six and eight, told HTFP: “It’s been a tough decision to leave journalism after 14 years but I’m looking forward to a new challenge and taking up a role that’ll keep me closer to home – and most importantly, my young family.

“I’ve thoroughly enjoyed my time at Archant – growing up, I only ever wanted to be a newspaper journalist and the company has given me a career I could have only dreamed of when I walked in the door as a trainee reporter in 2004.

“For me, journalism has always felt like more of a lifestyle than a job and I feel really fortunate to have experienced it. I’ll miss the people and the buzz and banter of the newsroom – it’s a time I’ll look back on with nothing but fond memories.”