Phones constantly ringing, the fog of fag smoke stinging, metal spikes sagging under piles of pierced paper, and the oldest reporter in the world – once again – passing wind in the corner.

News that the Carmarthen Journal’s town centre office was closing brought a call from an old colleague who once worked there in the mid-1980s.

He was keen to reminisce, and we ended up swapping memories – mine from the late-1980s at the tiny Lancaster Guardian office, then the larger Birmingham Metro News and later the huge news floor at the Birmingham Evening Mail, times when those venues were still the papers’ beating hearts.

We recalled constant queues of readers crowding the front receptions, placing classified adverts and flicking through past copies, others waiting for whichever reporter had drawn the short straw to listen to their daily gripes.

In editorial, journalists ducked behind screens to avoid the news editor’s glare as he looked for someone whose nib-count was low enough to warrant his dumping of the latest pile of press releases onto their desk.

The coffee was instantly weak, the milk regularly sour, and the mouthpiece on a certain reporter’s phone one day literally regurgitated clumps from years of his chewed up sandwiches when it was being cleaned.

But everyone perked up when the latest editions arrived, except for the inevitable moaning and squabbling over the latest typos.

In Carmarthen, my pal remembers the editor’s wife bringing her husband’s lunch in on a tray every day for him to consume with knife, fork and napkin in his office, door closed.

In Lancaster, I recollect the buzz every Friday afternoon as the assistant from finance wheeled the old tea trolley around, handing out small brown paper envelopes with that week’s expenses in cash. (And then the room emptied to the Brown Cow.)

And in Birmingham – on a news floor once heavy with nearly 200 staff – how we all stopped to gawp when editors Ian Dowell (Evening Mail) or Peter Whitehouse (Sunday Mercury) were screaming or throwing hot coffee at the perceived incompetence of a reporter, newspaper sales or marketing executive.

And then the whole floor was gripped with energy when a big story was breaking, hacks jostling for space at the news desk and then hurrying to cars with snappers and orders to meet the 3pm deadline for that day’s Late Night Final.

“When I first read that the [Carmarthen] offices were closing, I felt emotional,” my friend confided, “and it left me thinking ‘how will the community now be served?’.

“The paper still exists, of course, and reporters will undoubtedly still find their stories, but it still feels like the closing of a newspaper office that’s been in the community since 1810 is a huge page turning in history.”

He’s right: the flow of news tips from visiting readers, the gaggle of hacks advising on intros or contacts, the back-benchers creatively sucking pencils to crack the best headlines – those days are gone.

And while the modern journalist might justifiably point out how old-fashioned they were, and how much time was sometimes wasted, the old high street office had one crucial element that no number of websites and phone screens and social media can replace: people in the flesh.

People talking, smiling, greeting, laughing, commiserating, advising, shouting and sometimes snoring, but people all the same, breathing into that day’s or that week’s newspapers, then read by the other people we served, becoming their conversations, delights, debates and sometimes moans.

Reporters in 2018, those without an office to feed them, where will they find a new source of humanity, an alternative supply of ideas, jollity, guidance, syntax and resolve? Answers (and memories) on digital postcards below, please.

▪ Meanwhile, for any HoldtheFrontPage readers wanting to relive those days, The Belgrade Theatre is performing two new shows at the Coventry Evening Telegraph’s former home next month. 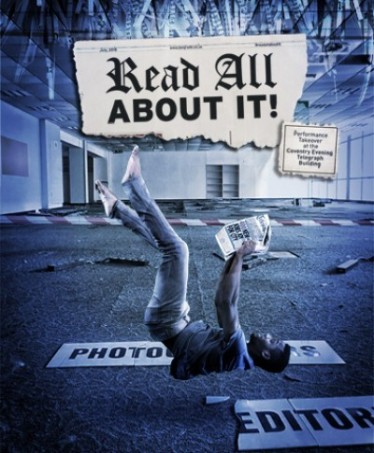 Retold will retell stories from the paper’s old pages, inviting the audience to share their own, while City Final is a journey through the building with snapshots of local history inspired by the paper’s coverage of major events over the years.

The two shows are part of the Read All About It theatrical event from Tuesday 10 until Saturday 14 July in celebration of the old Telegraph building’s 60th anniversary.