Readers urged to bombard May with tweets for weekly’s campaign 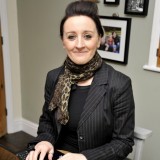 A weekly newspaper is set to hold a virtual march on Downing Street as part of a campaign to ban a medical procedure which left one of its journalists a “physical wreck”.

Campaigners says they have suffered serious life changing pelvic floor injuries and long-term chronic pain as a result of what is described as a minor procedure.

Now the Times is calling on readers to hold a ‘virtual rally’ tonight and bombard Prime Minister Theresa May, as well as health ministers, with tweets supporting calls for a public inquiry on the issue between 6pm and 7pm.

The paper hopes to get the hashtag #slingthemesh to trend on Twitter.

It comes after Labour backed Kath’s campaign when she attended a Parliamentary debate on the issue last month.

The first All-Party Parliamentary Mesh Group is set to meet on Tuesday, and Kath has been invited to address its members.

She said: “Many women are in too much pain to travel to the capital to protest, so we are doing a virtual rally instead via social media.

“We will be tweeting 10 Downing Street, the Prime Minister and her health secretaries, to raise awareness of what is clearly a national women’s health scandal and a personal disaster for everyone affected.

“An issue that gets support from politicians in every party is clearly a matter of great concern.”