The Labour Party has called for an end to a “public health scandal” after a weekly newspaper journalist’s three-year campaign.

The party has backed Kath Sansom, who works for the Cambs Times, in her bid to ban an operation which left her a “physical wreck”.

Kath launched her Sling The Mesh drive after she underwent an operation to have what is known as a TVT mesh sling for bladder problems, following childbirth.

Campaigners says they have suffered serious life changing pelvic floor injuries and long-term chronic pain as a result of what is described as a minor procedure. 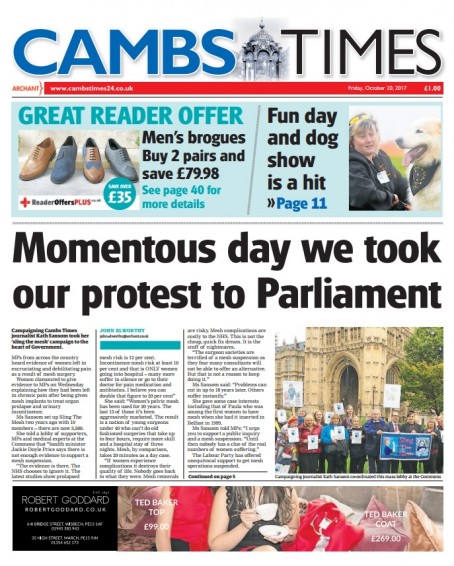 The Times splashed on Kath’s appearance at the debate

Ahead of a Commons debate on the issue last week, Shadow Public Health Minister Sharon Hodgson announced Labour would call for an independent inquiry into the mesh’s use, and wants an immediate halt to the use of all such implants.

At the debate, Kath told MPs: “Women’s pelvic mesh has been used for 20 years. The last 15 of those it’s been aggressively marketed.

“The result is a nation of young surgeons under 40 who can’t do old fashioned surgeries that take up to four hours, require more skill and a hospital stay of three nights. Mesh, by comparison, takes 20 minutes as a day case.

“If women experience complications it destroys their quality of life. Nobody goes back to what they were. Mesh removals are risky. Mesh complications are costly to the NHS. This is not the cheap, quick fix dream. It is the stuff of nightmares.

“The surgeon societies are terrified of a mesh suspension as they fear many consultants will not be able to offer an alternative. But that is not a reason to keep doing it.”