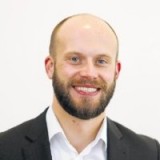 A weekly newspaper editor has become second in command at a daily which recently lost its own dedicated editor.

Newsquest has announced Henry Ainslie, left, is now deputy editor of the Glasgow Evening Times, following the departure of its editor Graham Shields.

Graham left his role in a management restructure along with Graeme Smith, who edited Glasgow-based sister daily The Herald.

Donald Martin, the two titles’ editor-in-chief, has now taken on responsibility to edit the titles, with Henry being appointed to deputise at the Evening Times.  Newsquest has not yet confirmed who will be The Herald’s deputy editor.

As part of the move, Henry will continue to edit Newsquest weeklies the Clydebank Post, Dumbarton Reporter, Barrhead News, Renfrewshire Gazette and Paisley People – with staff on those titles now primarily being based in Glasgow, though with access to Newsquest’s Clydebank office.

However, he will relinquish the editorship of the Helensburgh Advertiser and the Largs & Millport Weekly News to Greenock Telegraph editor Brian Hossack from next month – with staff on those titles being primarily based in Greenock.

The moves were announced by Donald in a message to staff which has been seen by HTFP.

He wrote: “Henry is a talented editor with a track record of success and I have no doubt will be a huge asset to the operation in Glasgow. His move has allowed us to strategically re-align our business to help sustain the future of our Clyde weekly titles and better protect and enhance the Evening Times by improving the collaboration and sharing of resource across our titles.”

“It is particularly pleasing that we have been able to recognise the talent and ambitions of our own editors and that both appointments have been internal promotions. I sincerely hope that these moves will encourage others to seek and explore the opportunities for growth and development at Newsquest Scotland.

“Across our Clyde & Forth operation each of our titles should be staffed with at least two reporters per title and a content editor covering a minimum of two titles. The Largs & Millport News and the Helensburgh Advertiser will move across when we have the full complement of staff in place.

“We have a great future ahead of us with a strong talented team and a portfolio of successful titles reaching the largest audience in our history. I am really proud of your achievements and look forward to working with you all again as we make 2018 our best year yet.”

Newsquest has declined to comment further on the changes.