An evening newspaper last published more than 30 years ago has been revived as a weekly.

Newsquest daily the Northern Echo has announced the return of its former evening sister title the Northern Despatch, which was first published the day after the First World War broke out.

Its last edition ran on 18 April 1986, but the Echo will now bring a “part-paid, part-free” newspaper bearing the Despatch name out every Wednesday.

It will serve Darlington, where the Echo is based, as well as towns in the southern part of County Durham including Bishop Auckland, Spennymoor, Newton Aycliffe and Willington. 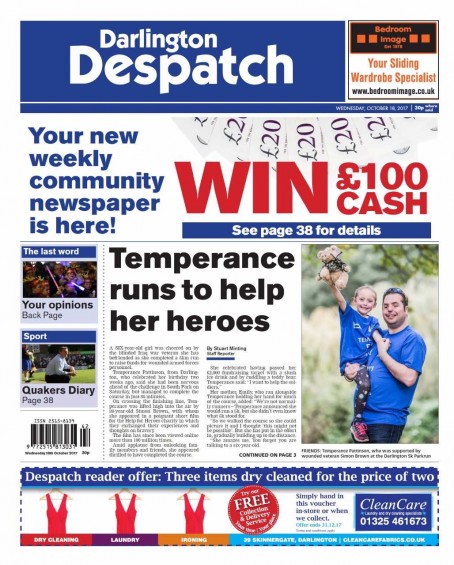 The Despatch will be delivered to thousands of homes across Darlington and the Wear Valley and will also be available for free from specific targeted locations.

It will also be on sale for 30p from retailers.

In a piece announcing its launch, Echo editor Andy Richardson said: “In their heyday, free papers were the go-to place for advertisers looking to connect with a local audience.

“But the days when a copy of the Advertiser was posted through every letterbox in the area is becoming a thing of the past – publishers are finding that the numbers simply do not add up.

“Businesses wishing to promote their goods and services to local people are turning to a wide range of media, with digital and online platforms increasingly important, but newspapers remain a very important part of the mix.

“Readers and advertisers tell us that they still value a good quality paper and that is why we have launched the Despatch.”

The first issue features local news, sport, nostalgia, vox pops and revives the popular ‘Under the Town Clock’ comment feature which appeared in the original Despatch.

The Echo recently recruited two apprentices, Paige McDermott and Georgia Banks, who will contribute to Despatch.

Tomorrow morning Paige, Georgia and Andy will be in Darlington town centre handing out copies of the paper and conducting vox pops to get reader comments, which will be published in next week’s issue.

Andy added the revived Despatch would be a “very community-focused” and “bright, modern-looking” paper.

He said: “It is rare nowawdays for newspaper publishers to launch new print editions, so we are delighted that we are doing that in Darlington and Wear Valley.

“I strongly believe that print media can work if it serves the community with stories and content they value.”