“Hyperlocals: they’re all very well, but how can an occasional publication limited to 30-odd pages make a real difference to the local community?”

Those were the words of one media watcher during our mini-debate after he’d read my last hyperlocal blog on the Peckham Peculiar, which publishes once every two months.

And so I was heartened when a copy of the Times of Tunbridge Wells thumped down on my doormat, posted by a news desk who are rightly proud of what they’re doing every week.

The Times was launched by the independent One Media group in March last year, and its first edition stretched to 72 pages.

A year later, on 16 March 2016, the pagination was an even-healthier 84 pages, and the venture seems to have been successful enough for a sister Times of Tonbridge paper to have launched this spring.

It’s far too early to judge the newest paper, but with 12 months under its belt the original Tunbridge Wells title is very much looking the part. 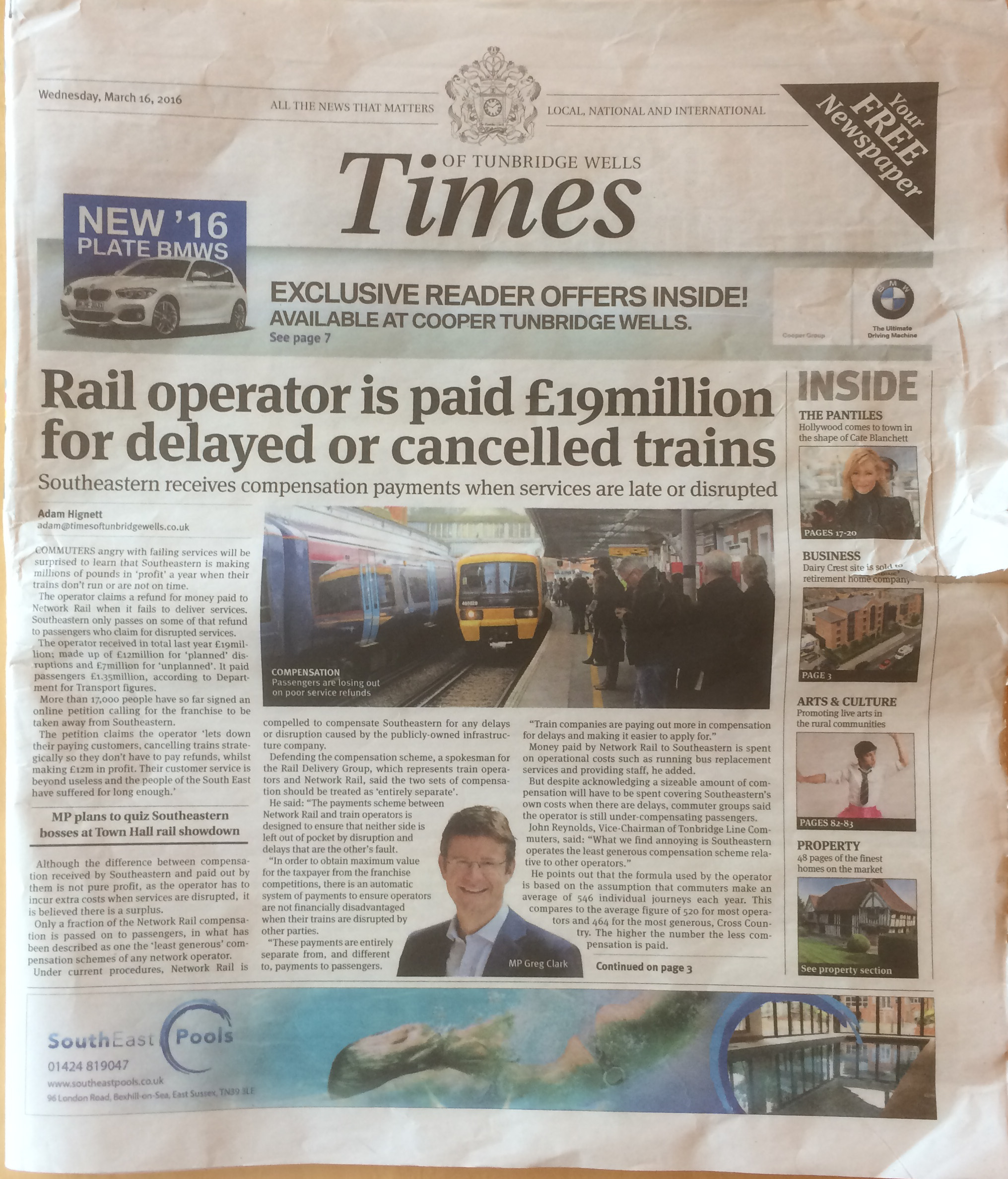 The ‘cash for cancelled trains’ splash was a decent tale explained in broadsheet style over 27 paragraphs, turning to a column on page three.

It was encouraging to see so many words on the front of a free weekly, and impressive that this still left space for two strip adverts, four write-off pictures and a quality, eye-catching masthead that stands out in its white space.

‘All the news that matters’ is the strapline at the top of page one, and so here’s a peek at some of the best leads on the inside pages of the Kent weekly.

The Times’ story count was at first glance healthy enough for a free hyperlocal weekly, with around 110 reads on 31 editorial pages – 14 covering news, four shopping, ten leisure and three motoring.

That said, there was perhaps too much reliance on national and world affairs which filled four of the 14 news pages.

And there were no sports pages, which was surely a missed opportunity: Tunbridge Wells FC were finalists in the FA Vase in 2013, and its cricket club hosts several of Kent County’s home matches, let alone all the town’s junior sport.

Those glitches aside, editorial director Richard Moore and his small team are starting to make the Times look and read like an established newspaper, helped by the recent input from ‘editor at large’ Frank Baldwin, former managing editor of the Kent & Sussex Courier Group.

Commercially, it was heartening to count more than 50 display adverts in the main section, plus the chunky 40-page ‘Move with the Times’ property pull-out that was 90pc advertising.

With a weekly print run of 30,000 – plus the initial 7,000 copies of the Tonbridge sister paper – the Times series feels like it’s quickly outgrowing its ‘hyperlocal’ title.

▪ Email steve.dysonmedia@gmail.com if you’ve got a hyperlocal paper you’d like him to consider reviewing.