A free weekly newspaper will be relaunched today under the ‘Local People’ banner after joining forces with three hyperlocal websites.

The Clevedon Mercury has been published for more than 150 years but will now be editionised and renamed after three sister community sites – Clevedon People, Nailsea People and Portishead People – with the first issues hitting the streets today.

Under the move, content submitted by users to the Local People sites, such as reviews, comments, photos and blogs, could appear in print alongside stories by journalists.

The websites are part of Northcliffe Digital’s Local People network of more than 100 community sites and the transformation of the Clevedon Mercury, also owned by Northcliffe, is thought to be the first partnership of its kind between the sites and a newspaper. 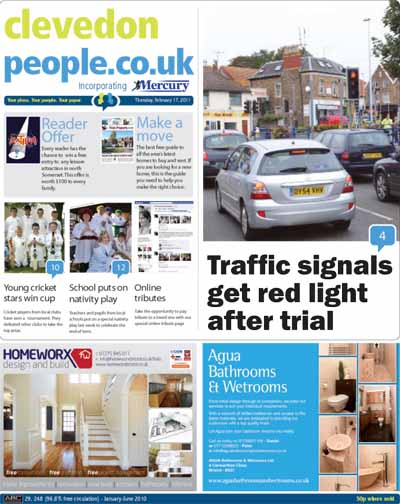 Northcliffe Digital managing director Roland Bryan said: “This is an exciting new product for the community and advertisers in Portishead, Nailsea and Clevedon.

“The Mercury’s excellent news service has always put it at the heart of its community. Now, thanks to this partnership with localpeople, that community can help set the agenda for their local title.

“Now, the discussion, forums and photos submitted by users of our local sites will help to enrich the paper’s content.

“Advertisers will have the best of both worlds – the penetration of print and the extra reach and response-led marketing of digital, all in one package. This really sets us apart from the competition.”

Abigail Edge, a regional publisher for Northcliffe Digital, added: “By bringing the Local People sites and the Clevedon Mercury together, we’re making sure that what happens online also happens in the newspaper.

“This is a great chance for people to create the headlines in their town, and to have their say on the issues that affect them locally.”

“And thanks to this website, you now don’t just read the news, you are very much part of it.

“Your comments, photos, tweets and blogs mean your voice has never been so important – and by bringing the Mercury and Nailsea People together we’re making sure that what happens online also happens in the newspaper.

“Not only will you be able to get all your community news, discussion, events and reviews from one source, you’ll also have the chance to create the headlines in Nailsea.”

Nailsea People was launched nearly two years ago and Carol Deacon, a former editor at the Clevedon Mercury, is the community publisher for the site.