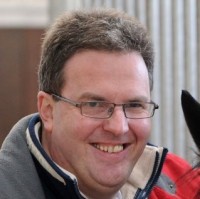 A senior journalist who was in charge of the opinion pages at a regional daily has died suddenly aged 52.

Tributes have been paid to Yorkshire Post opinion editor Tom Richmond, who has been described as a “formidable journalist” by colleagues.

In addition to his work for the Leeds-based daily, Tom, pictured, was also known for his writing on horse racing.

Posting on Friday, James wrote: “The Yorkshire Post family is still coming to terms with our loss. He truly embodied everything that we wanted to be as a newspaper.

“Already we miss him dearly. Tom was a formidable journalist; a ferocious inquisitor; a tenacious talent determined to make a difference and yet, for all of those traits he went about his journalism with a deft touch.”

Archant editor-in-chief Jeremy Clifford, who edited the Post between 2013 and 2015, said: “Every day we would speak first thing in the morning before people arrived for work.

“We had our differences at times but [Tom] always had powerful journalism in his heart. He’s an enormous loss.”

Yorkshire Evening Post editor Laura Collins added: “Tom’s sudden loss leaves a big hole in the newsroom. He was and always will be the epitome of everything [the Post] stands for.

“A fearless, passionate journalist and caring colleague who’d bend over backwards to help. I’ll always be grateful for his support. He’ll be sorely missed by us.”

And Post journalist Ruby Kitchen said: “Tom was a formidable giant of our newsroom, who knew the power of words and wasn’t afraid to use them for good.

“Fiercely intelligent, incredibly knowledgeable, and always willing to give guidance. He also really cared, and that is what is such a loss to us all. Devastated.”

Prior to his time at the Post, Tom’s career saw him work on titles including the Nottingham Post, Exeter Express & Echo and Hull Daily Mail.

He was shortlisted for Racing Writer of the Year at the Horserace Writers and Photographers Association Derby Awards in 2014.

Post sports editor Nick Westby said: “As well as his work at the front of the book, Tom Richmond wrote with great knowledge and warmth about horse racing, championing Yorkshire’s nine racecourses and the many stables and individuals who dedicate their life to the sport.

“Tom is sorely missed by us all.”

She wrote: “This is incredibly sad news. A tragic loss of such a talented and kind person. You’ll be greatly missed.”