Hospital chiefs have acted after a local newspaper exposed how patients were being “put at risk” by a failing blood test system on its patch.

East London NHS Foundation Trust has agreed to open a new test centre after Newham Voices revealed a three-week delay in testing, caused by a walk-in system for rapid blood tests being replaced by an online booking system.

After publishing its initial story on the issue, further patients came forward to share their concerns – prompting the NHS to take action in a move the title’s editor believes has “saved lives”.

The monthly paper, launched in 2020 to serve the London Borough of Newham, splashed on the campaign’s victory in its April edition. 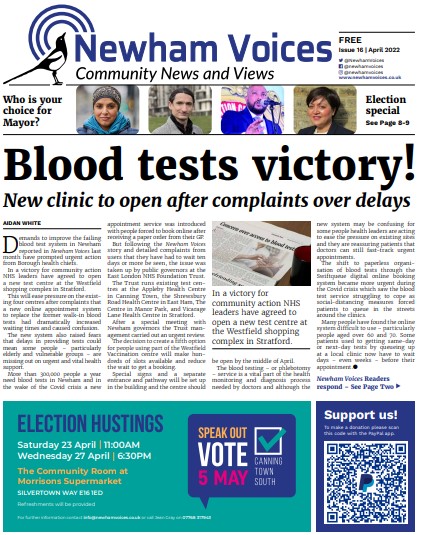 Editor Jean Gray told HTFP: “Newham Voices was delighted that the East London NHS Foundation Trust took urgent action to address the crisis in blood testing services after we exposed how patients were at risk as a result of a change in the system which was leading to unacceptable delays in diagnosis and treatment.

“Basically, our story followed a complaint about how a walk-in system which gave people the chance to have rapid blood tests was suddenly changed to an online booking system leading to up to three-week delays.

“This was particularly important because the people most affected were elderly and vulnerable people many of whom have little or no access to computers or are unfamiliar with online booking systems.

“Our first story set the scene and raised some concerns. We also raised it with the local health trust and at first we got the brush off.

“But once we published the story, people contacted us with some very worrying stories and angry comments.”

The issue was then pursued through the trust’s public governors, who protested to the chief executive and senior trust officials.

Jean added: “We have no doubt it was the seriousness and potential harm to patients that hit home with the trust and eventually they agreed to take urgent action and set up an additional blood testing centre.

“We believe this case shows the value of local reporting that can literally save lives.

“One major criticism of the NHS and the trust was the lack of the communication with the community about these changes.”