An independent local newspaper’s founder has shared his ambition to create journalism jobs as a result of the project.

Aidan White has created volunteer-led Newham Voices to serve the London Borough of Newham, with the first pilot edition being published this month.

A regular monthly print edition is planned for 2021, while the title also has an existing website.

Aidan, a former Guardian journalist and general secretary of the International Federation of Journalists, launched the project after being asked to mentor a group of volunteers writing for Newham Mag, Newham Council’s newsletter, by the borough’s mayor Rokshana Fiaz. 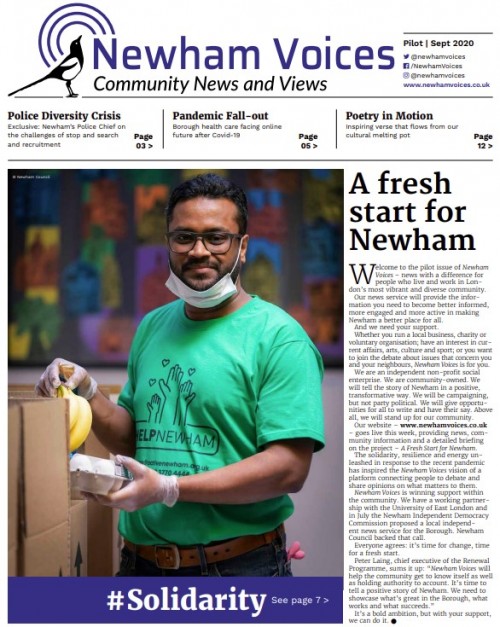 Aidan told HTFP: “The initiative is volunteer-led and is jealous of its editorial independence.

“We have made it clear to everyone – including the mayor – that we will not be tub-thumping for political parties, but we will try to speak up for the community and the many social causes that define the news landscape in Newham.

“So far we have around 25 writers and reporters bolstered by a handful of veteran journalists and editors who are handling and supervising the editorial process.

“There is one paid person at the moment but we have ambitions to create jobs where we can and to pay for journalism in the future.”

A community fundraising drive has raised £6,000 for the project, while it is also offering advertising rates to local businesses.

A local membership system is being created too, while “appropriate donor organisations” are being sought.

Aidan added: “Put simply, the project aims to provide a news and information platform for the people of Newham, many of whom have been forgotten and left behind as the news business has gone into decline.

“At the same time we want to equip people with communication skills so that people in every neighbourhood can become local correspondents.

“We are starting slowly, but the signs are that there is still a hunger for news and information at street-level.

“People really do have an appetite for some nourishing journalism.”