A wife and husband journalist team achieved a rare double in their second week of working together on the same newspaper.

Mariam Ghaemi and Russell Claydon provided the front and pack page leads respectively for Friday’s Bury Free Press after Mariam started work at the paper a fortnight ago.

Mariam and Russell, pictured, met 15 years ago while undertaking their journalism training in Cardiff, but had avoided working on the same title until now.

Russell covered news at Archant’s East Anglian Daily Times and Ipswich Star until April 2010, when he began working for the Free Press in their hometown of Bury St Edmunds.  He has served as sports editor at the Iliffe-owned weekly since 2015. 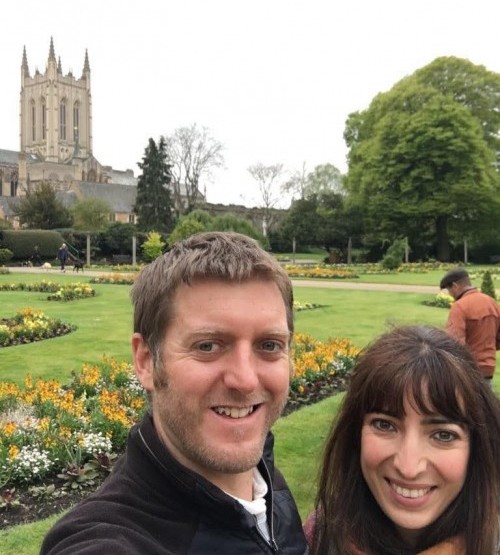 Speaking on Friday, Russell told HTFP: “When I met my wife-to-be on the post-grad newspaper journalism course at Cardiff University I never imagined we’d end up working on the same title one day.

“Our friends often joke about our media influence on the area so to put out our first front and back page paper on April Fool’s Day does seem a good one for them, and to show our girls. Perhaps we’ll use it as an excuse for a Friday evening drink later.”

Mariam, who works under her maiden name, started at the Free Press and its Suffolk News sister website as a senior reporter on 22 March after nearly 12 years at the EADT.

She said: “My first splash at my new company was always going to be special, but for my husband to have the back page of the same edition definitely makes it one to keep.

“I joked on Twitter that there must be a pun here somewhere to which a colleague replied in jest: ‘I guess that makes everyone else the roses between two thorns…?’

“Seriously though, our front page article focused on the cost-of-living crisis on the day the energy price cap rose by 54pc.

“This is a huge issue affecting our communities and as a local media company we intend to keep covering all aspects of it.”

Mariam added: “Russell and I have managed to avoid working at the same paper for the past 15 years after meeting at Cardiff Journalism School.

The first time ever hubby @russclaydon and myself have written both the front and back pages of a newspaper…there's got to be a pun there somewhere @buryfree @SuffolkNewswire @journalism_news #LocalNews pic.twitter.com/AVIa68ClRM