A murdered BBC journalist who began her career in the regional press may have been killed by mistake, it has been claimed.

Legal papers filed in Paris claim Jill Dando may have been killed by a Russian hitman in a case of mistaken identity.

Jill, who started out on her hometown newspaper the Weston Mercury and went on to present BBC programmes including Crimewatch, was shot dead on the doorstep of her London home in 1999 at the age of 37.

The claim provided a splash for West Country daily the Bristol Post yesterday. 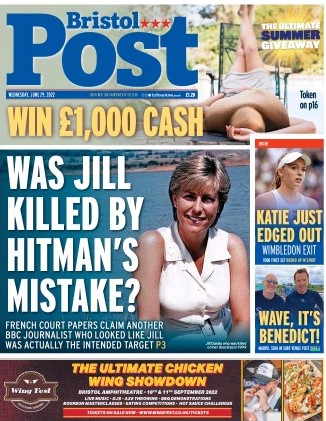 The documents accuse French fashion boss Gerald Marie, 72, of using the Russian Mafia to try and kill Lisa Brinkworth, now 55, a BBC journalist who exposed him as an alleged sex abuser.

According to the Daily Mirror, lawyers in France have reportedly argued the mix-up may have been due to the similarities in the appearance of the two women, their occupation, and the fact they both lived in the same area of London.

Lisa has claimed Mr Marie wanted her dead after he allegedly sexually assaulted her in 1998, when she was working undercover to expose crimes in the fashion industry.

Mr Marie has denied the allegations, describing them as “fanciful nonsense”.

Barry George was found guilty of Jill’s murder in 2001 and spent seven years in prison before being acquitted in 2008.