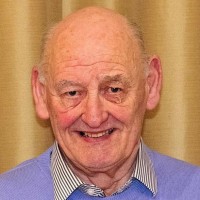 An editor who was still writing for his old newspaper until a few weeks ago has died aged 77.

Tributes have been paid to Donald Fullarton, who served as editorial director of the Clyde and Forth Press stable of papers.

Donald, who was awarded the MBE for services to journalism in 2006, also spent five decades running the National Council for the Training of Journalists’ senior exams in Scotland.

He was an honorary secretary of the Society of Editors in Scotland, a member of the Scottish Journalism Training Forum, and a life member of the Newspaper Press Fund.

Donald, pictured, remained a contributor to his hometown paper the Helensburgh Advertiser, which he had previously edited, until a few weeks before his death.

Bill Livingstone, a former chairman of the Society of Editors in Scotland and a long-time Clyde and Forth Press colleague, told the Advertiser: “Few journalists will leave such a lasting imprint on the Scottish regional press as Donald Fullarton.

“Our later careers were not only to run in parallel within the same newspaper group – which became Scotland’s largest independent newspaper holding, with titles in four jurisdictions in the UK and Ireland – but were to extend into decades of service in multiple roles within the Scottish Society of Editors, of which Donald was a distinguished standard-bearer.

“In his disparate roles as weekly newspaper journalist and photographer, editorial director, regional newspaper champion and higher-education lecturer in journalism, Donald helped to set – through his interfaces with the Society and the National Council for the Training of Journalists – the national ethical and training standards of the profession and shape vocational courses run by Scotland’s higher-education institutions.”

NCTJ chief executive Joanne Butcher told HTFP: “Donald was a very special person in our trade and a stalwart of the NCTJ in Scotland, training so many journalists and running our senior qualifications for five decades.

“There was always an Oxdown map in his office. Heartfelt condolences to all his family, friends and colleagues.”

Donald began his career with the Helensburgh and Gareloch Times before moving to the Advertiser in 1965.

After editing the Advertiser, he spent 30 years as editorial director at the Clyde and Forth Press befor emoving into journalism training in the late 1990s.

Donald taught news writing first at the Scottish Centre for Journalism Studies and then at Glasgow Caledonian University.

He also founded Headline Helensburgh, Scotland’s oldest talking newspaper for blind and visually-impaired people, and spent more than 50 years taking pictures at Dumbarton Football Club’s home and away matches – serving as official club photographer from 2008 until he retired last year.

Former BBC journalist-turned MP Christine Jardine, who worked with him at the SCJS in the early 2000s, said: “What aways struck me about Donald was how much he simply loved being a journalist.

“His contribution to the industry over the years was huge. There are journalists up and down Scotland who will always be grateful for the guidance of this genuine gentleman.”

Drew Cochrane, another former Clyde and Forth Press colleague who retired in 2014 after 40 years as editor of the Largs and Millport Weekly News, added: “Donald was one of the influences in my enduring editorial career as one of my long time colleagues, my editorial director at one time for Clyde and Forth newspapers, and as a fellow officer in both the Guild of Editors and, then, Society of Editors which we both served as chairmen and secretaries.

“I remember him fondly as a wise counsel, an excellent writer and, to be old-fashioned about it, a sophisticated gentleman with our common interests in football and theatre.”

Donald died peacefully at Paisley’s Royal Alexandra Hospital on Tuesday. He is survived by wife Phyllis, their children Campbell, Victoria and Claire, and eight grandchildren.

His funeral details have yet to be announced.