An editor has shared his farewell front page as he departs a regional daily for a new national role.

Karl Holbrook has worked his last day at the Northern Echo, where he spent 18 months in charge, as he prepares to become executive editor at the Daily Express.

Karl will be replaced at the Darlington-based Echo by Gavin Foster, editor of Reach plc’s Newcastle-based Chronicle Live brand.

In a farewell post on Twitter, Karl paid tribute to his colleagues at the Newsquest-owned paper and also shared an image of the traditional farewell spoof front page his colleagues had prepared for him, pictured below. 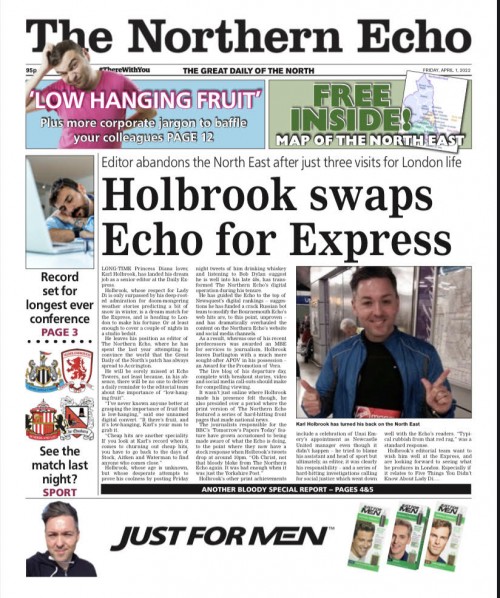 He wrote: “It’s been an honour and I go on a high as we become the most-read site in Newsquest – from 12th when I took over – for the first time and we also top the charts for unique users and circulation in 2022.

“This incredible team has battled on every front, building audience through search, social and by making our homepage and printed pages a destination for journalism they should all be incredibly proud of. As a result, our audience is growing faster than any other main Newsquest title.

“Together, we’ve launched four new social communities amassing more than 30,000 new followers and a 30c boost to our social traffic [and] we’ve improved our search engine optimisation to reach more unique users than any other Newsquest site in England.”

Karl added: “Importantly our print brand not only remains the best selling NQ title in the country but it’s got its mojo back regularly being featured on national paper reviews on BBC and beyond, and our content has been imitated by The Times, The Observer and others.”