An editor has hailed what he termed a “growing future” for print after launching two new paid-for titles.

Stuart Fraser, editor-in-chief at Independent Media, has shared his belief in print after the first editions of the Heartlands Voice and Liskeard Voice were published on Wednesday.

Last month Independent Media revealed it was launching the two new editions of its Cornwall-wide Voice series, while ceasing publication of the Truro-based Sunday Independent indefinitely.

A third new Voice title, covering Launceston and North Cornwall, is expected to launch in June. 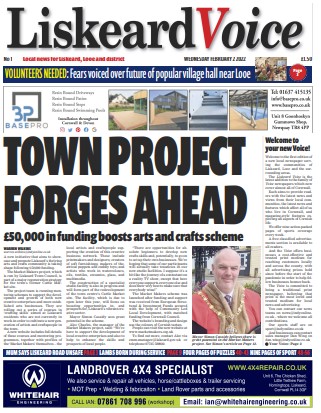 Liskeard Voice, pictured above, will cover Liskeard, Looe and the surrounding area, while the Heartlands Voice will focus on Camborne and Redruth.

Speaking to HTFP, Stuart said: “We’re pleased to have added two new editions to the Voice series, meaning we now have eight editions covering most parts of Cornwall.

“We’ve had a lot of encouraging and supportive messages from people we’ve contacted in the areas served by the new titles, in and around Liskeard, Looe, Camborne, Redruth and Pool.”

He added: “It reinforces our passionately held belief that there is a future for – a growing future for – traditional print newspapers operating as a trusted source of information and entertainment for their local communities.”

Publication of the Truro-based Sunday Independent has been placed on hold since Christmas due to what has been described as a “toxic mixture” of rising costs and the coronavirus pandemic which saw the paper’s staple diet – sport – wiped out during the early part of lockdown..

Independent staff have been redeployed to work on the Voice titles as a result.